Last night, Mom was on bath duty as Dad had cut his hand earlier and didn’t want to get it wet until it had healed a little bit. So Mom got to learn first-hand that when our Little Mermaid decides she wants to swim, everything in the bathroom (including whoever is giving the bath) gets soaked.

But today, the hand is healed and Dad is back to his regular role as Bather-in-Chief. He managed to escape the office a few minutes early, so he got home before Juliette was overtired. This made bathtime a real pleasure, with lots of smiling, giggling and playing. And surprisingly little splashing.

Fashion-wise, Juliette is wearing her Cheeky Monkey pyjamas. If the cap fits, and all that…. 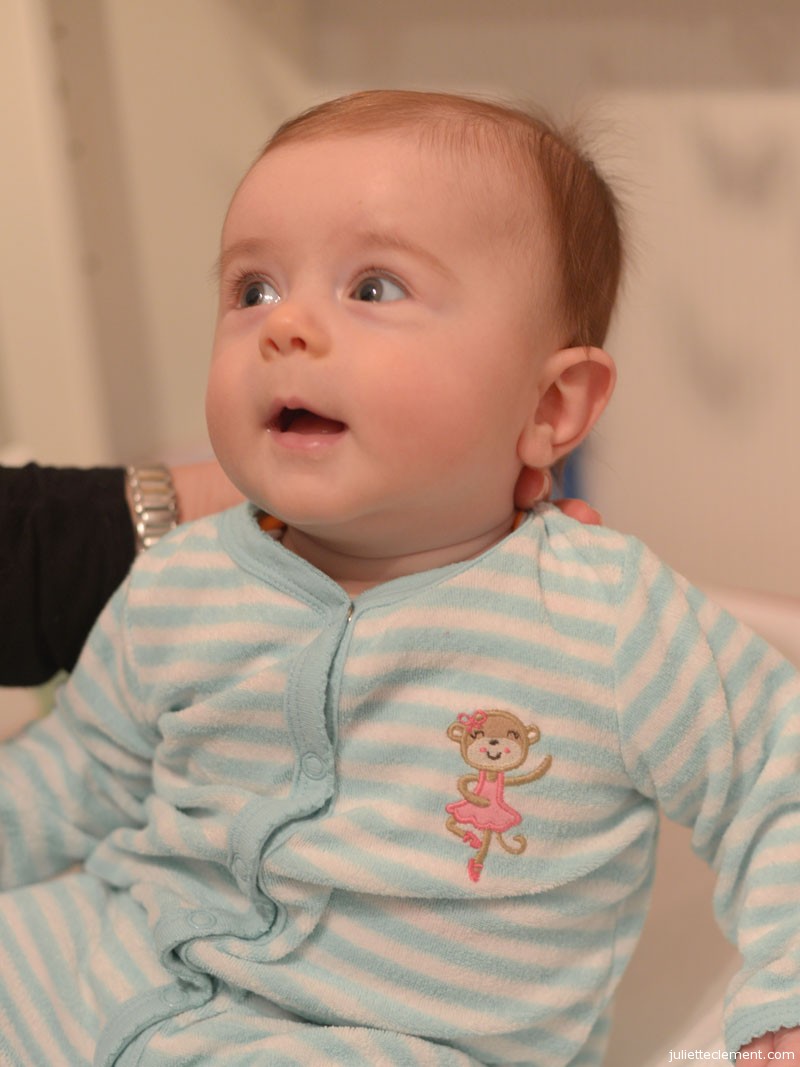 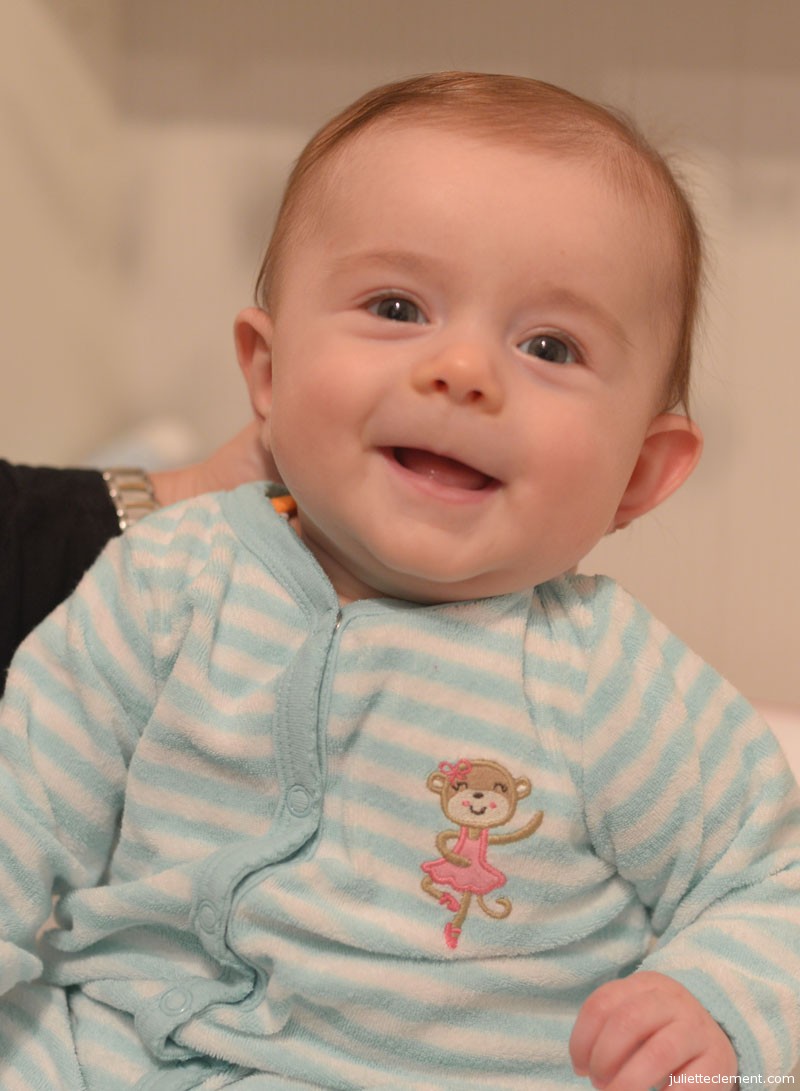 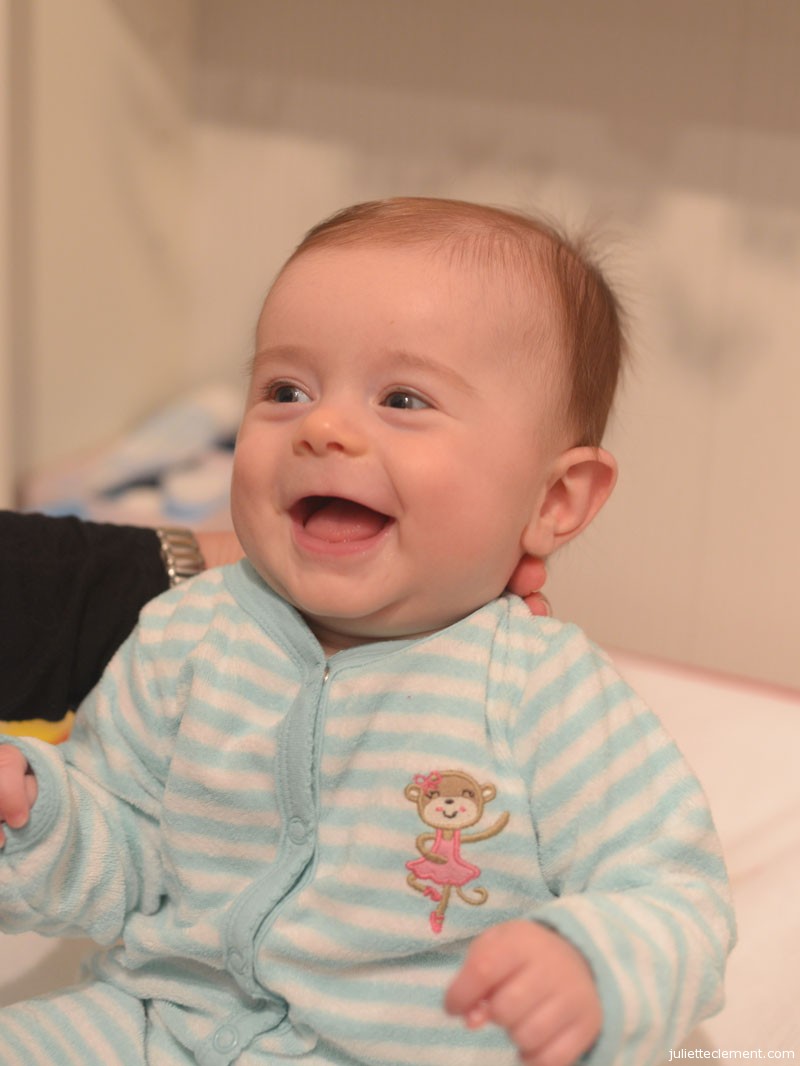 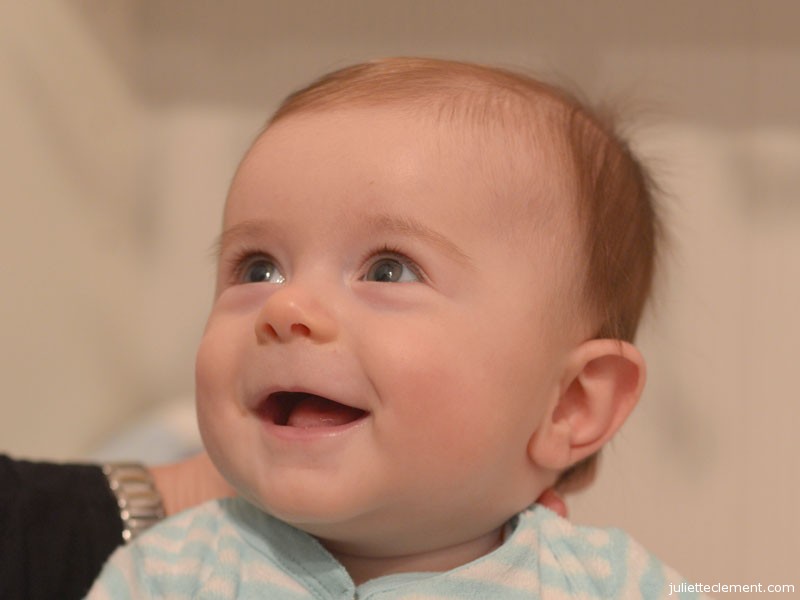 Looking out at her adoring fans…

Since long before Juliette arrived, Saturday and Sunday mornings have always been quiet reading times around our house — a chance to catch up on the week’s newspapers, or to tackle the latest pile from Amazon to satisfy Dad’s insatiable appetite for books. Juliette had a huge library before she was ever born. We take reading seriously around here. 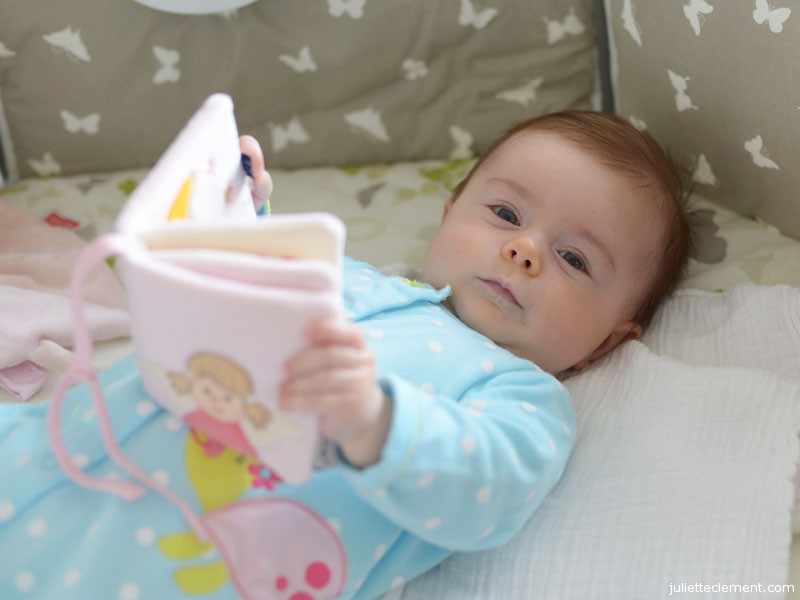 “Have you seen what it says in here?” 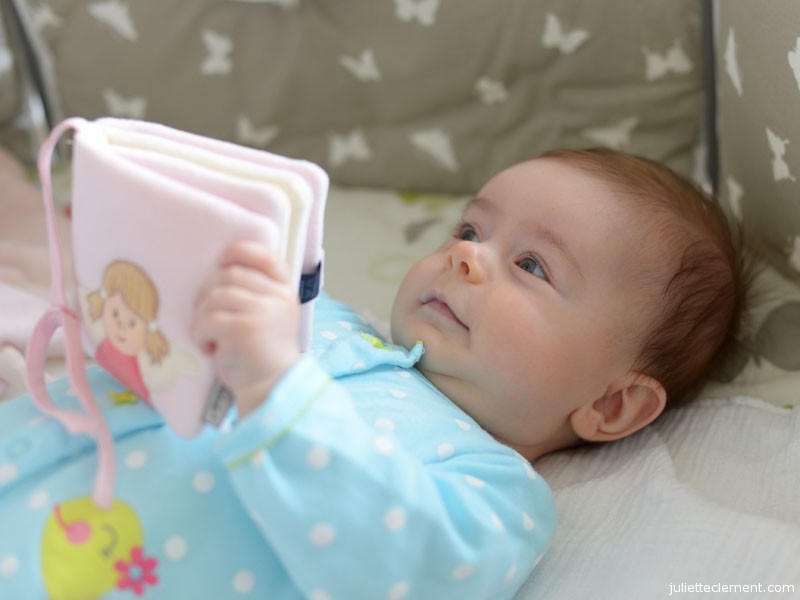 “Another book finished. That’s given me a lot to think about!” 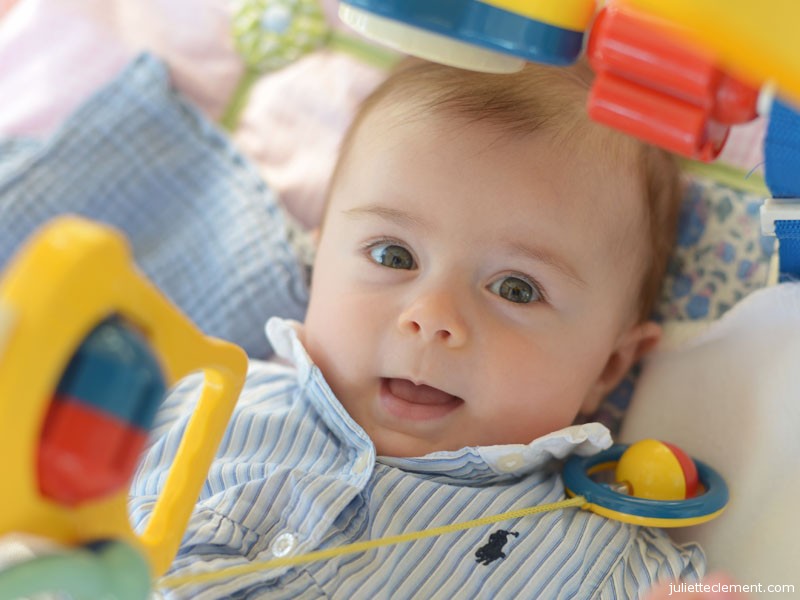 Clowning around on my play mat 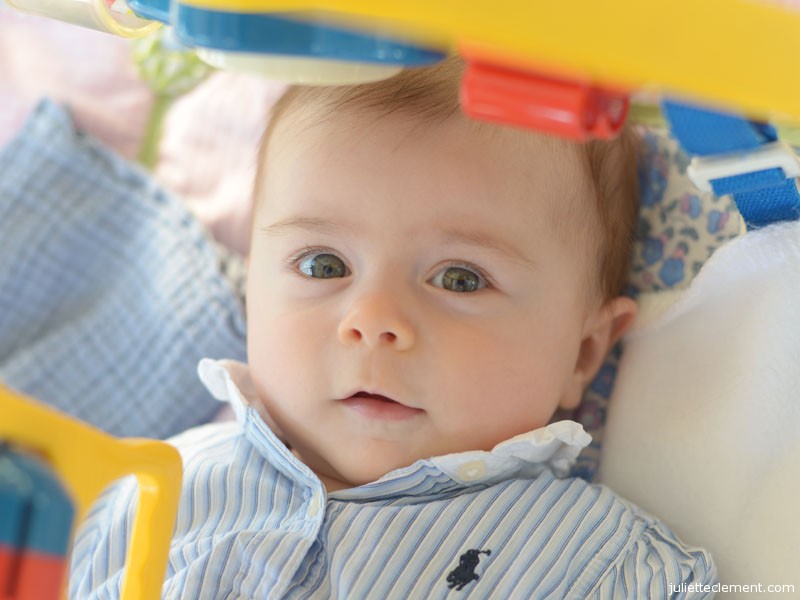 Who’s that guy with the camera?

Juliette is just beginning to laugh, and while it’s not the most beautiful laugh in the world, it does bring a smile to Mom and Dad’s face. We thought we’d catch a few shots of Juliette enjoying herself on the balcony on a warm spring afternoon.

Bathtime has been something of a transition. Initially, it was something that Juliette grudgingly endured. Over time, though, it’s become something that she enjoys more and more. When she’s all ready for her bath, being carried between bedroom and bathroom, she gets a huge smile on her face. Feet in first, a chance to look at herself in the mirror, then a bath while Dad sings funny songs. What’s not to like?

Now, however, she’s started to discover her legs. And practice her swimming. So bathtime becomes a participatory sport for anyone within a few feet of the tub. Splashing is de rigueur, and everything (and everyone) in the bathroom gets absolutely soaked.

Dad’s not sure what the solution is — a huge bathmat is one option; moving to the big tub is another. I suspect that ‘getting Juliette to sit calmly in the tub,’ sadly, isn’t on the cards. 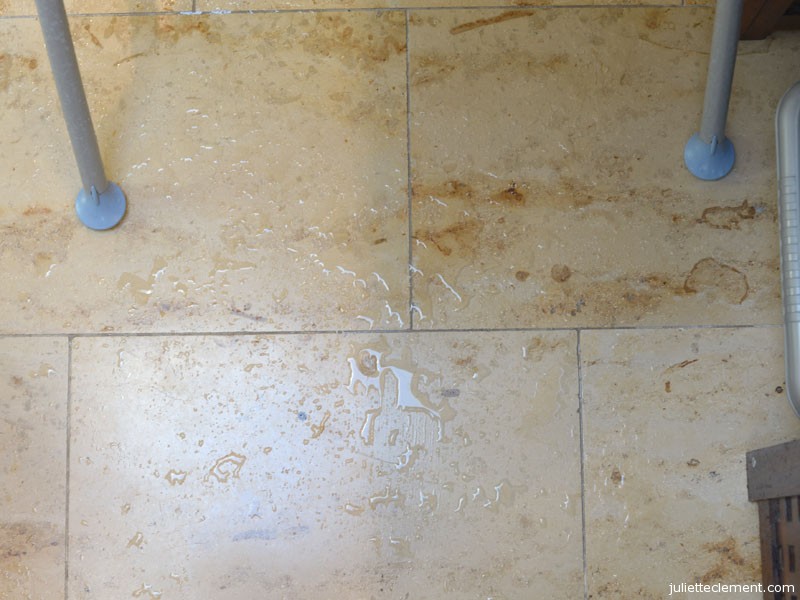 Time flies. It seems like we were just taking Juliette’s three-month pictures, and already it’s time to get the camera out again. Just as shocking is the fact that our journey started almost a year ago to the day, when Aude quipped, “I’d better have one more cocktail, because I don’t know when I’ll be able to have the next one.” (Cynics in the audience might tease that it actually started a few weeks earlier, when Matt asked Aude, “Go on, have one more glass of champagne,” with a knowing wink…) On one hand, that all seems like a very long time ago, and we’ve gotten used to Juliette being part of the household as if she’s always been here (Daisy might disagree, however). On the other hand, it seems like just a blink ago that this whole thing started, but we’ve actually been gearing up for this for more than a year.

As ‘birthdays’ go, Juliette can count this as one of the crappier ones. Instead of presents, she got two vaccinations and a clean bill of health for her four-month check-up. A few minutes of crying at it was all over, and so far she seems in good spirits despite her eventful afternoon.

The latest stats are in: Juliette weighs in at 6.6kg and 64cm tall. (I promise, I’ll stop posting Juliette’s weight and height before she’s a teenager.)

That’s not quite in the 97th percentile anymore, but it’s still in the top quartile for height and the third quartile for weight. She’s still wearing clothes for 6-9 month-olds, but she’s growing less quickly now so they last a little longer (she gets to wear outfits two or three times, instead of just one!) 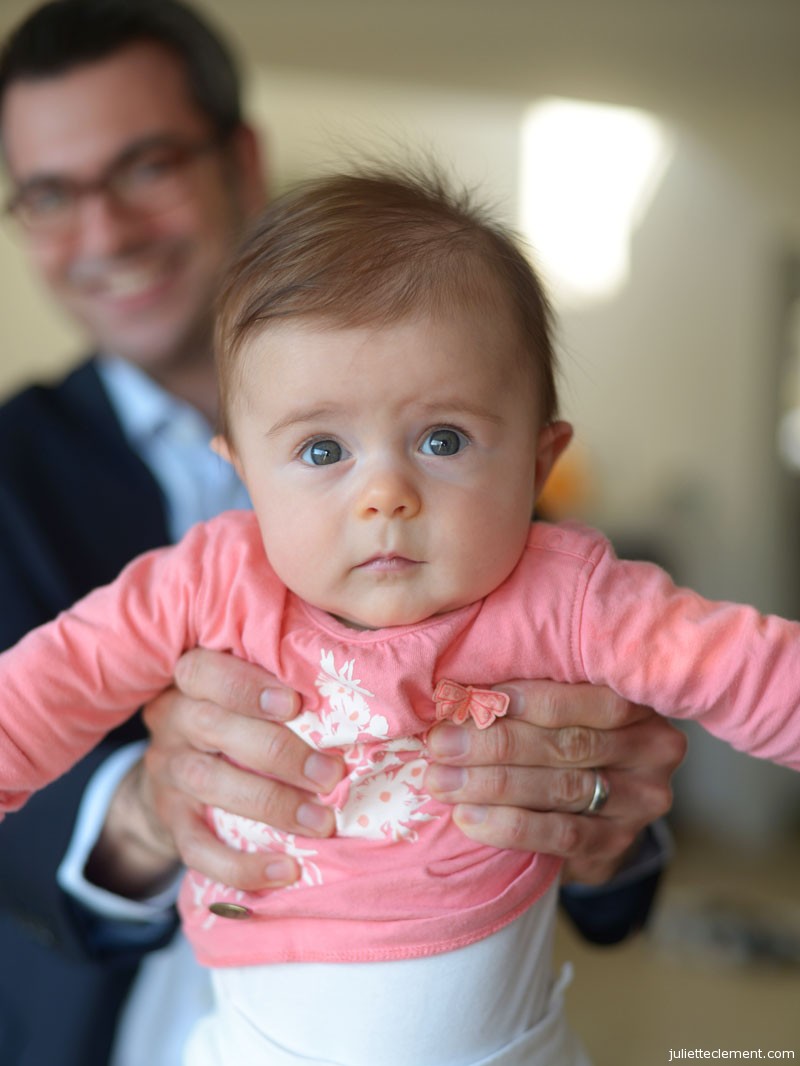 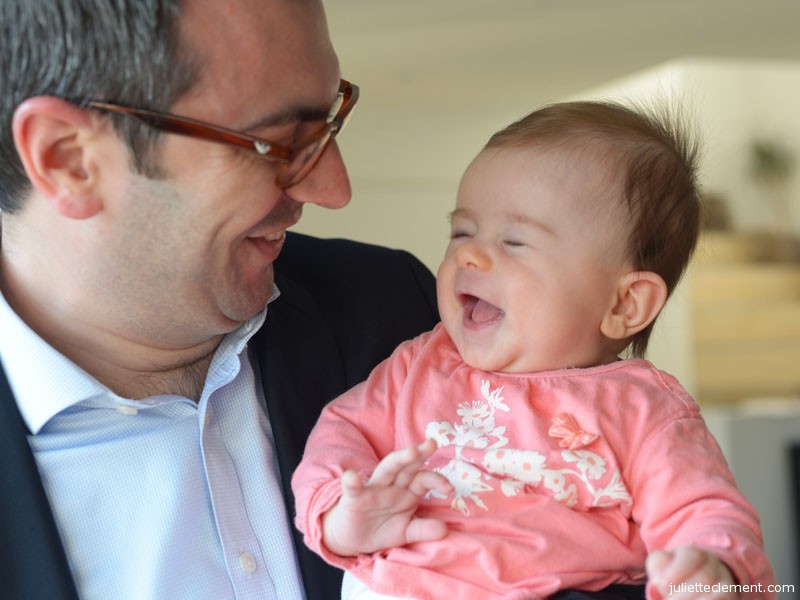 Having a good time with Dad on my ‘birthday’

If you thought that standing up was fun, damn, just wait until you try sitting down! It’s all the fun of standing up, with none of the effort. Plus, without all that pesky gravity to fight, you can concentrate on playing with all sorts of things. 100% of your attention can be dedicated to putting stuff into your mouth.

Little wonder, then, that Juliette is delighted with her new Bumbo chair that arrived today. After this, she may never want to stand again. 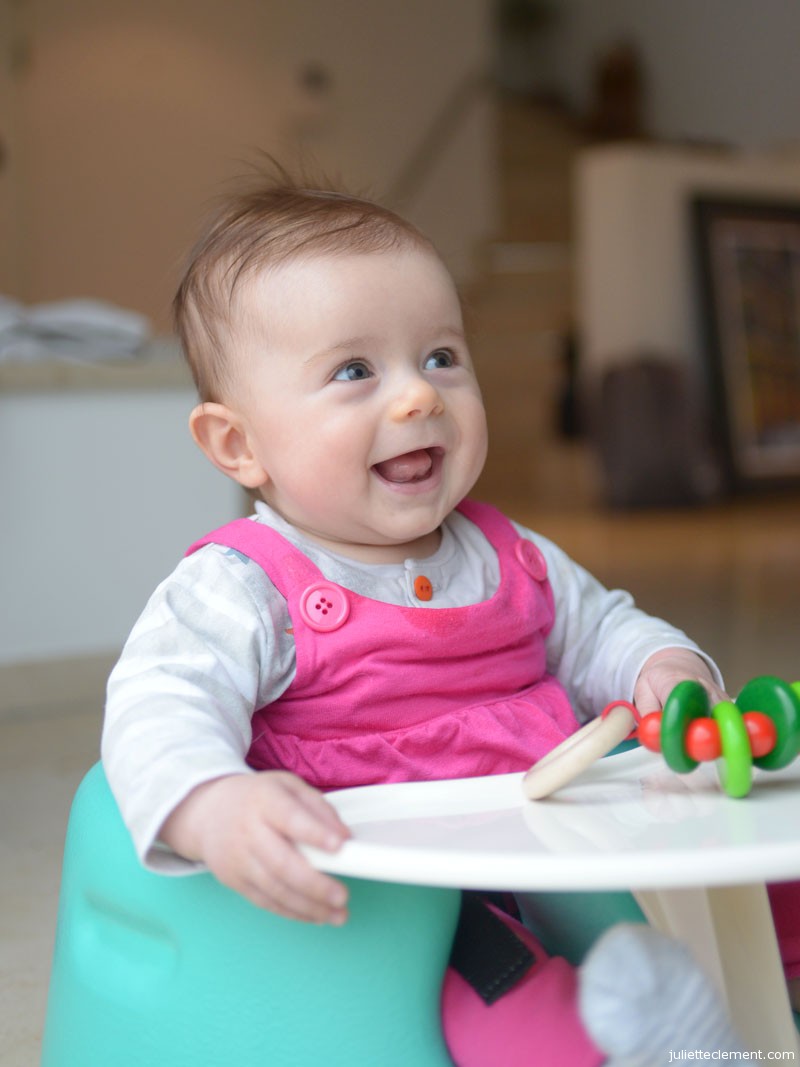 Sitting down is great! 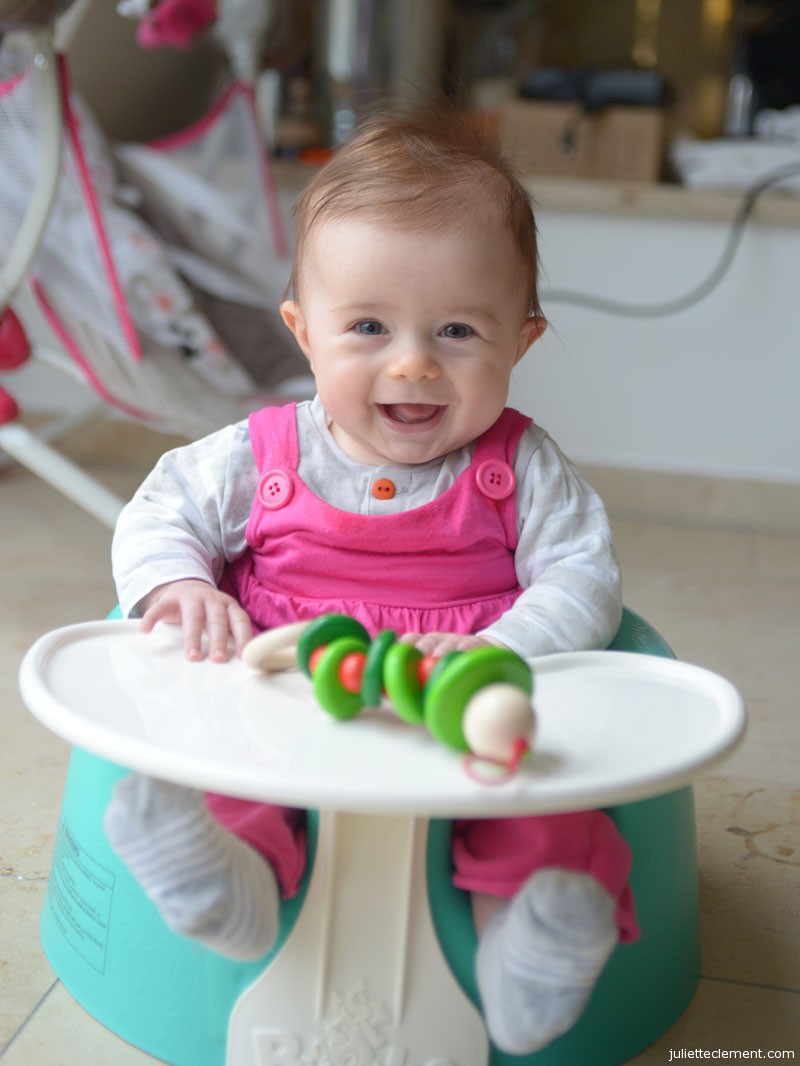 Armed with a teething ring, who could ask for anything more? 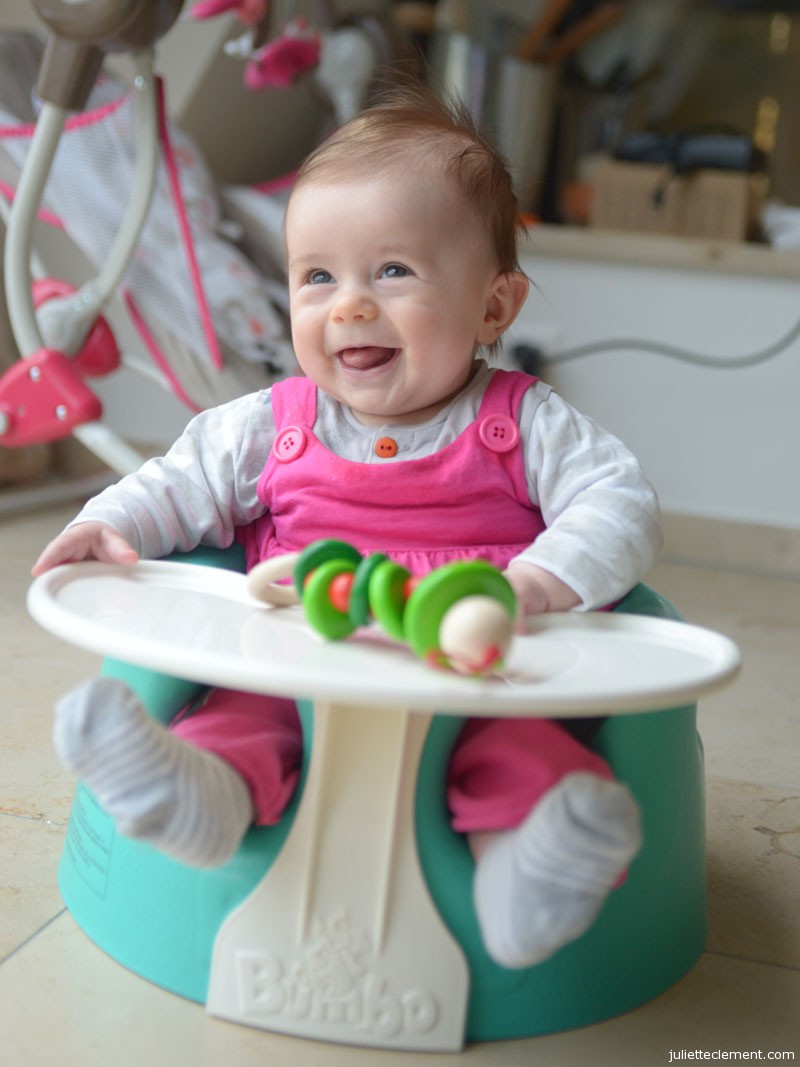 “Dad, you’ve been holding out on me. This sitting malarkey is awesome. No wonder you spend all your time sat flat on your ass…”

Juliette isn’t crawling yet, and she’s a long way from walking. Even turning over is proving elusive. But she does love to stand up!

Admittedly, she’s a little unsteady on her feet and needs a helping hand to stay upright, but she’s using all her muscles and doing her best. There’s no quicker way to put a smile on her face. 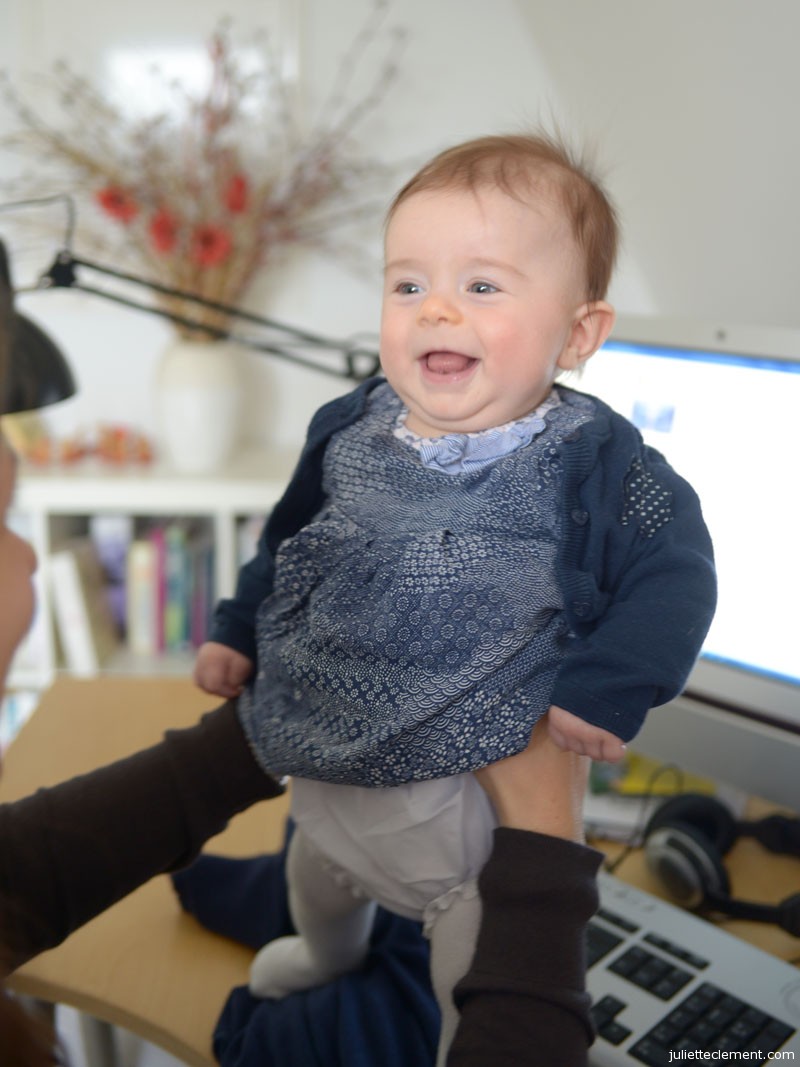 There’s nothing Juliette loves more than standing up!

It’s Friday night, and Dad got home a little early so bathtime was right on schedule. That left a few minutes to play in Dad’s chair before bed! What fun! 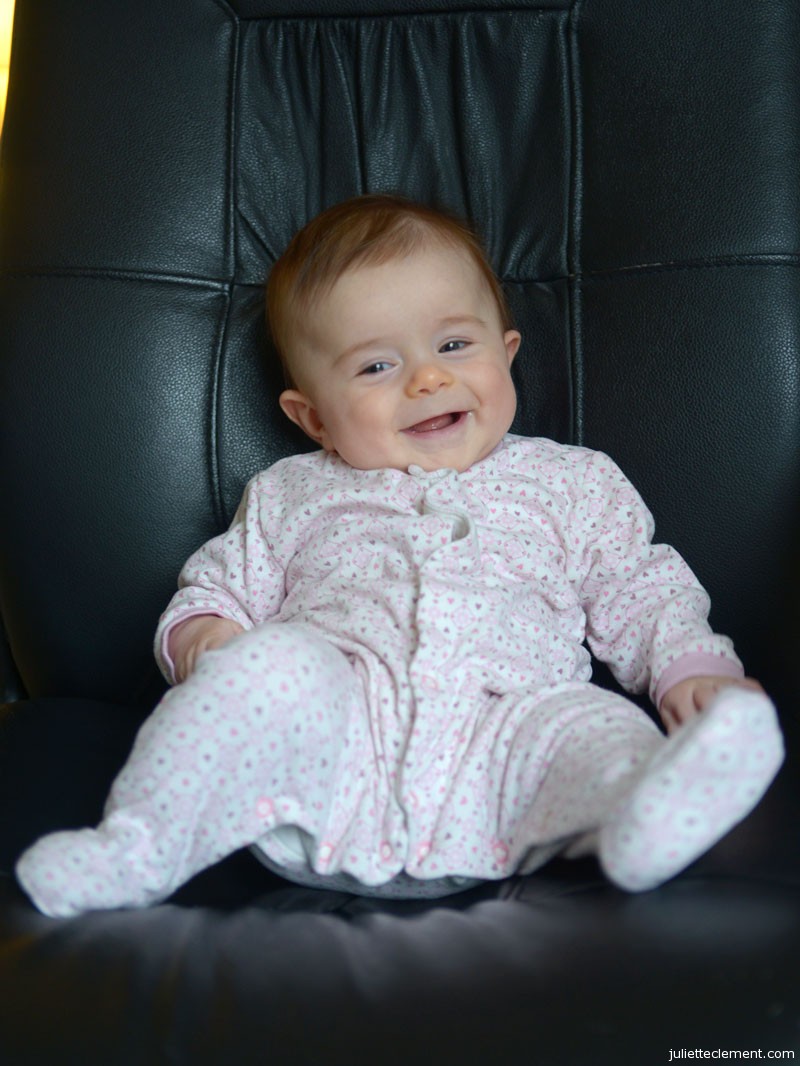 “I don’t know why you’re always so grumpy when you get home from work. Sitting at a desk is fun!” 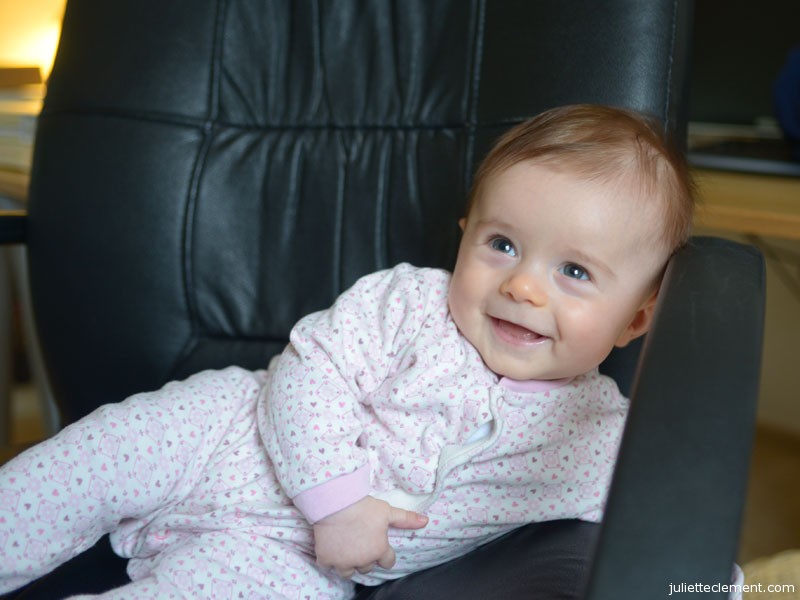 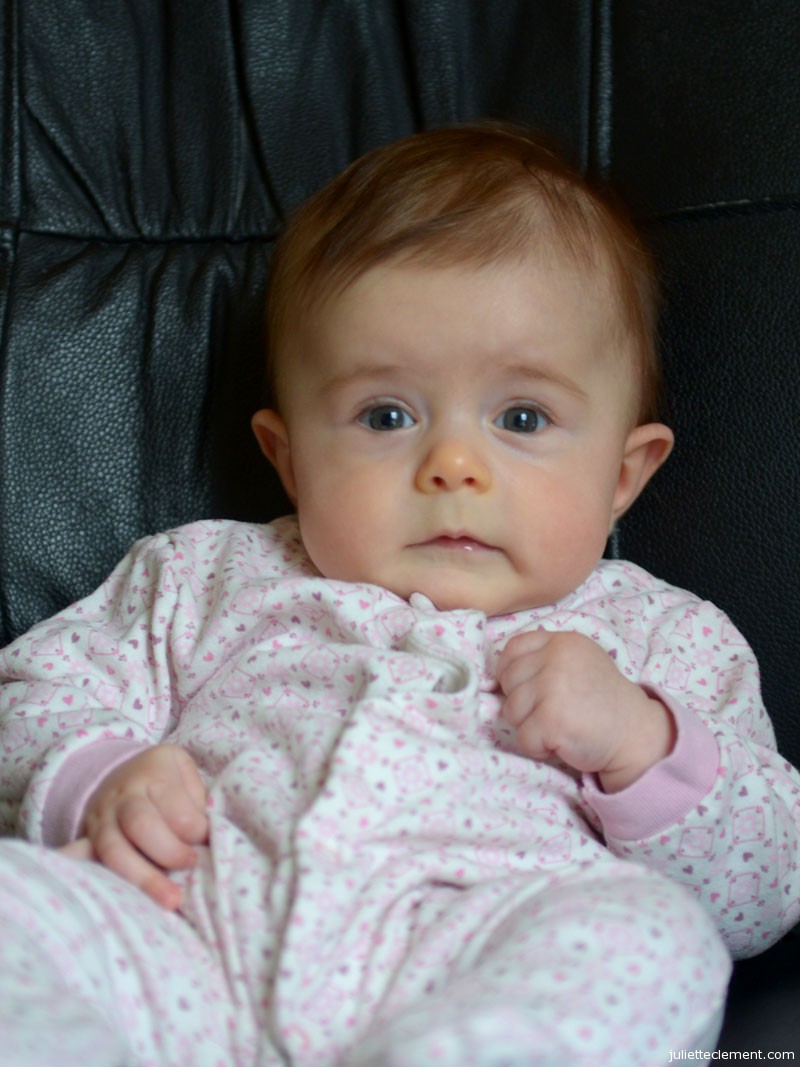 As the days are getting longer, it seems a little bit odd to put Juliette into her bed before it’s even starting to get dark outside. But our rhythm seems to be very successful — Juliette is a good sleeper — so we stick to it regardless of what’s going on outside. 6:30 is bathtime; 7:00 is dinner time; and 7:30 is lights-out.

We still swaddle Juliette each night, as it helps her fall straight to sleep, but in the past few days we’ve discovered that she’s becoming a little Houdini. No matter how tightly we bundle her, she manages to sneak an arm-or-leg out and wakes herself up. Normally it takes an hour or two for her to work herself free; tonight she managed it in about 90 seconds. 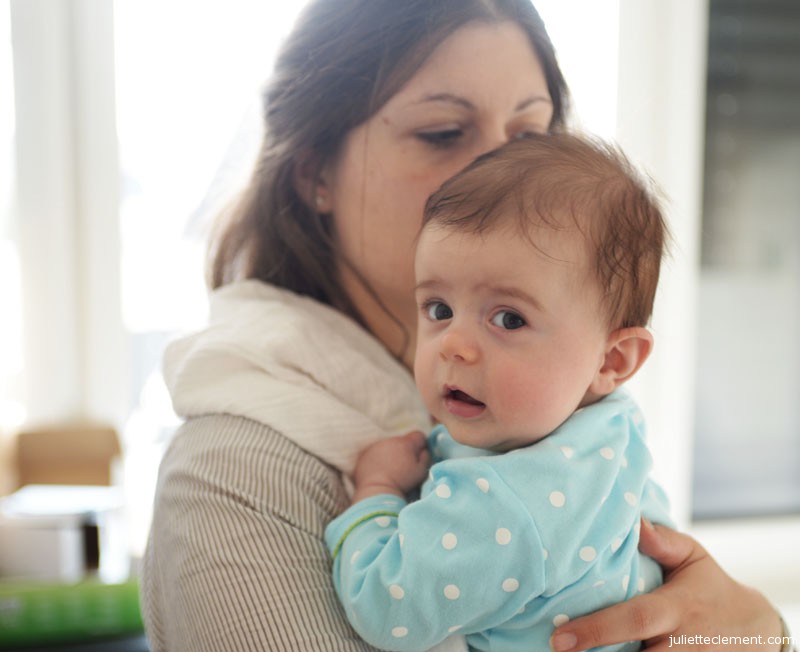 A last look at Dad before heading off to bed.