Juliette decided to show off some of her new dance moves before bed.

Dad puts a lot of effort into his food, and that includes presentation. Not just for fancy dinner parties, but for day-to-day dining as well. This evening, Juliette’s omelette was sprinkled with freshly diced chives, with two whole chives laid across the top for effect. Classy, right?

Never let it be said that Juliette doesn’t have an eye for detail. She decided that Daisy’s cat food looked a little uninspired. So she helped herself to a little mint from the garden and spruced that plate right up. 🙂 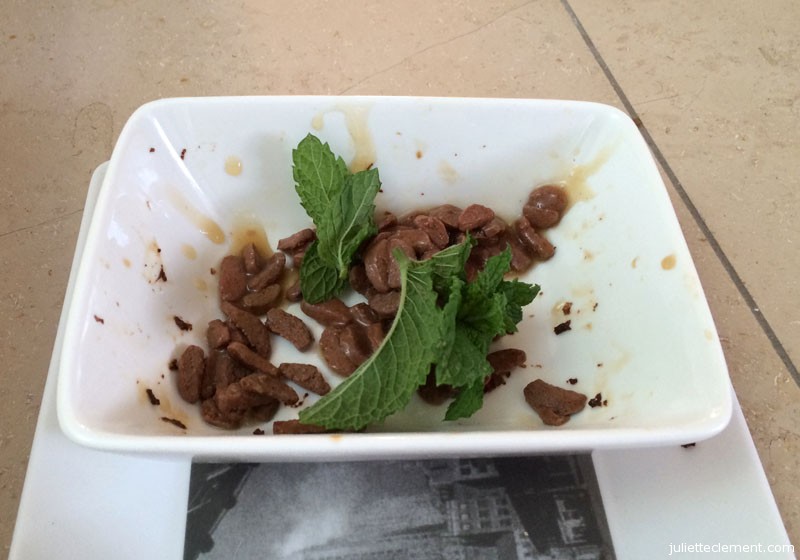 Attention to detail is an important life skill… 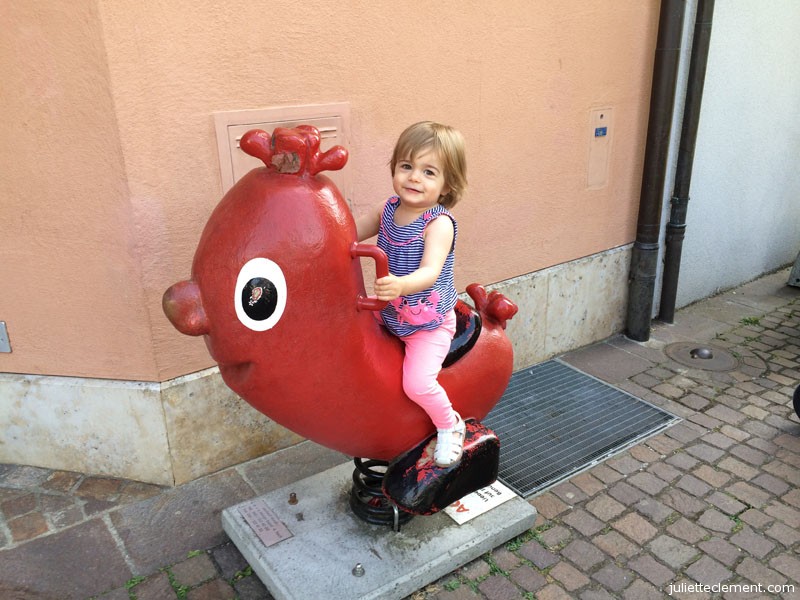 Juliette rides the giant sausage outside our local butcher

It’s a big milestone for Juliette — one-and-a-half! And a new haircut to celebrate. 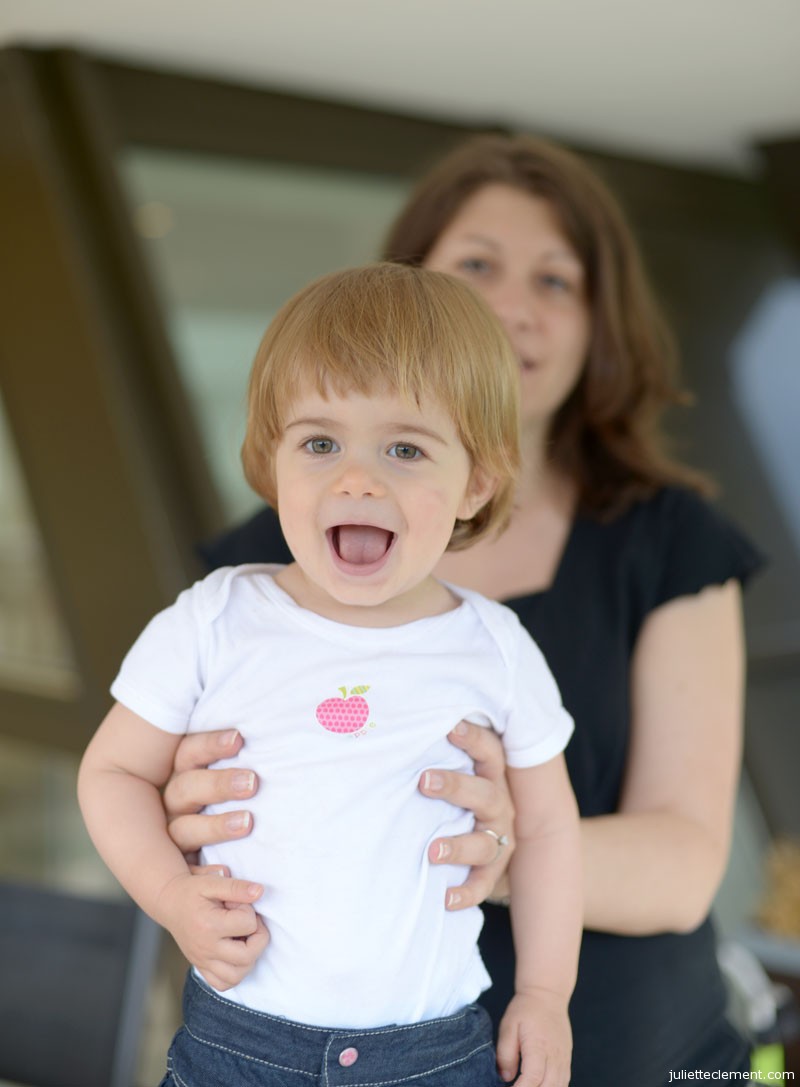 One and a half!

In the past few weeks, Juliette has really started talking. Her vocabulary is growing almost daily, and obviously focuses around the words that are most important in her daily life:

There’s a lot written about how French children eat differently. It’s true that, in general, Juliette eats what Mom and Dad eat (although usually the following day, because like ‘The Lady’, she gets too hungry for dinner at eight. Just don’t call her a tramp). But it’s not just at home where kids eat adult food.

At most restaurants, we don’t order a separate meal for Juliette — she just eats some of whatever Mom and Dad are eating, with maybe a special compote or dessert thrown in for good measure. But Mom and Dad’s choices weren’t particularly suited for sharing today, so we asked the kitchen if they could rustle something up for our 18-month-old.

Here’s what they came up with — a beautifully prepared and plated asparagus risotto, which Juliette loved.

The morale is this: if you feed kids like kids, assuming they’ll turn up their nose at anything other than chicken nuggets and french fries, you’ll get kids that eat like kids. If, on the other hand, you feed your kids as you’d like to be fed, you’ll be amazed at what they’ll try.

Juliette’s absolute favorite food? Anything that Mom and Dad are eating. Or a slice of whatever Dad is chopping in the kitchen. Or a taste of sauce, straight from the pan. 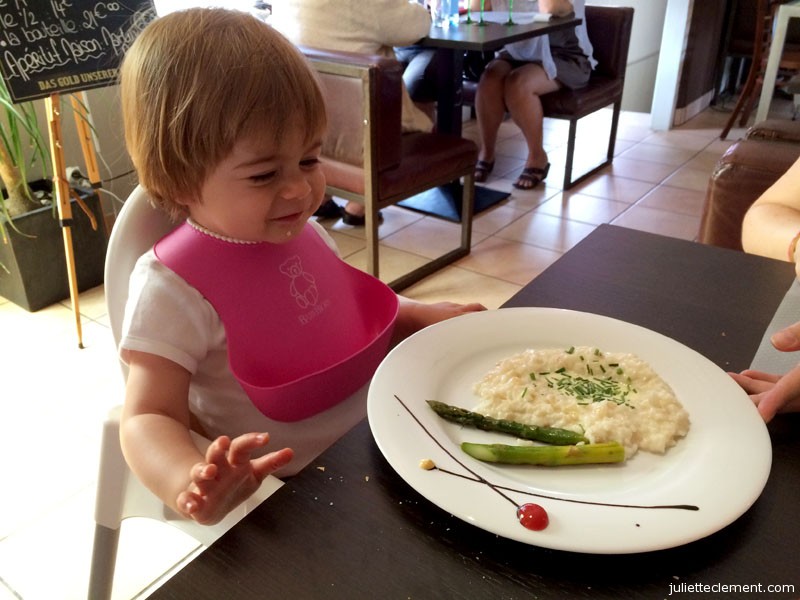 Juliette gets ready to tuck into a fantastic risotto

The thermometer in the car read 37C yesterday (that’s 99F in old money) and Mom and Dad don’t have air conditioning in the current apartment. So there was no choice: it was time to spend the afternoon at the pool. We were not the only ones with this idea, and it took a while to find a postage-sized spot to lay out our towels and relax in the shade before heading into the water for a refreshing dip.

Our local pool is really nice, with four main pools — an olympic-sized pool for laps, a diving pool, a mid-sized pool for the older kids, and a shallow, shaded pool with lots of fountains and slides for the little ones.

Mom started out with Juliette in the mid-sized pool, but with all the noise, excitement and crowds, it was too much for Juliette. Dad tried again with the shallow pool, with more success. After a few anxious moments, Juliette discovered the showers and fountains and had loads of fun playing with them. She even made some new friends with the other babies in the water.

After swimming, of course, came ice cream. Dad braved the twenty-deep queues to secure ice-cream for his family (it’s what Dads do!). Fifteen minutes later, he returned with a Magnum for Mom and a Hello Kitty popsicle for Juliette. Juliette, being an adventurous eater, decided to try both. 🙂 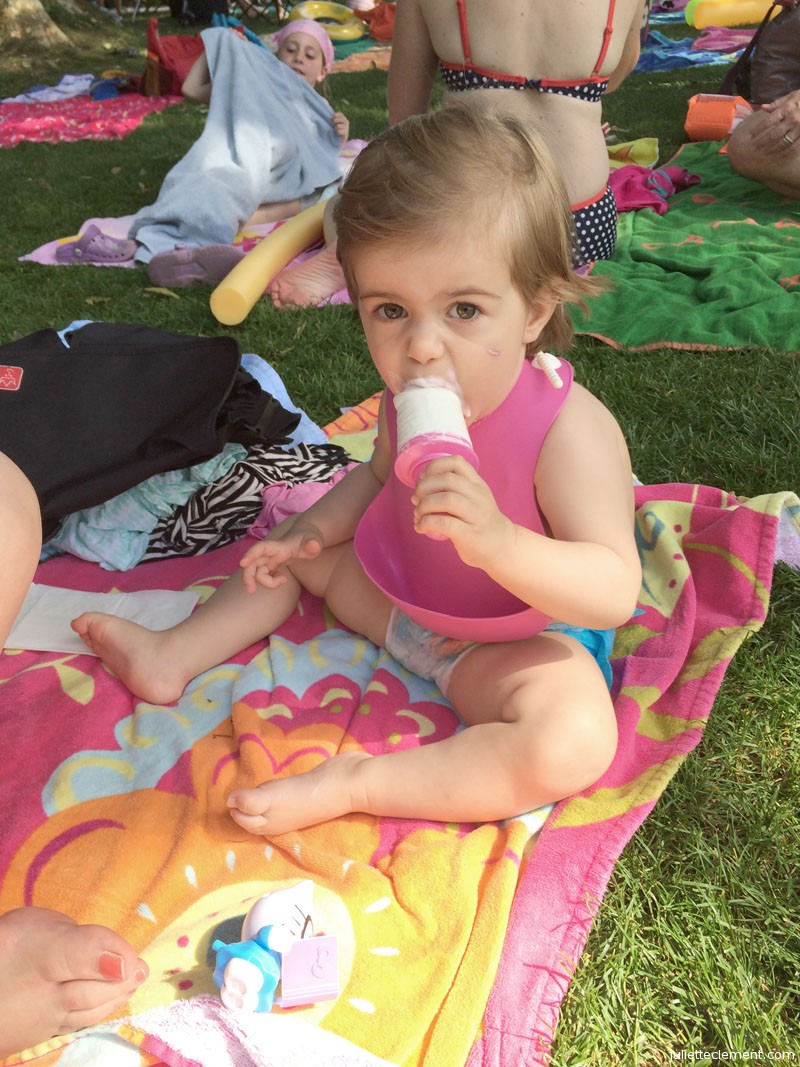 Nothing better than ice cream by the pool. 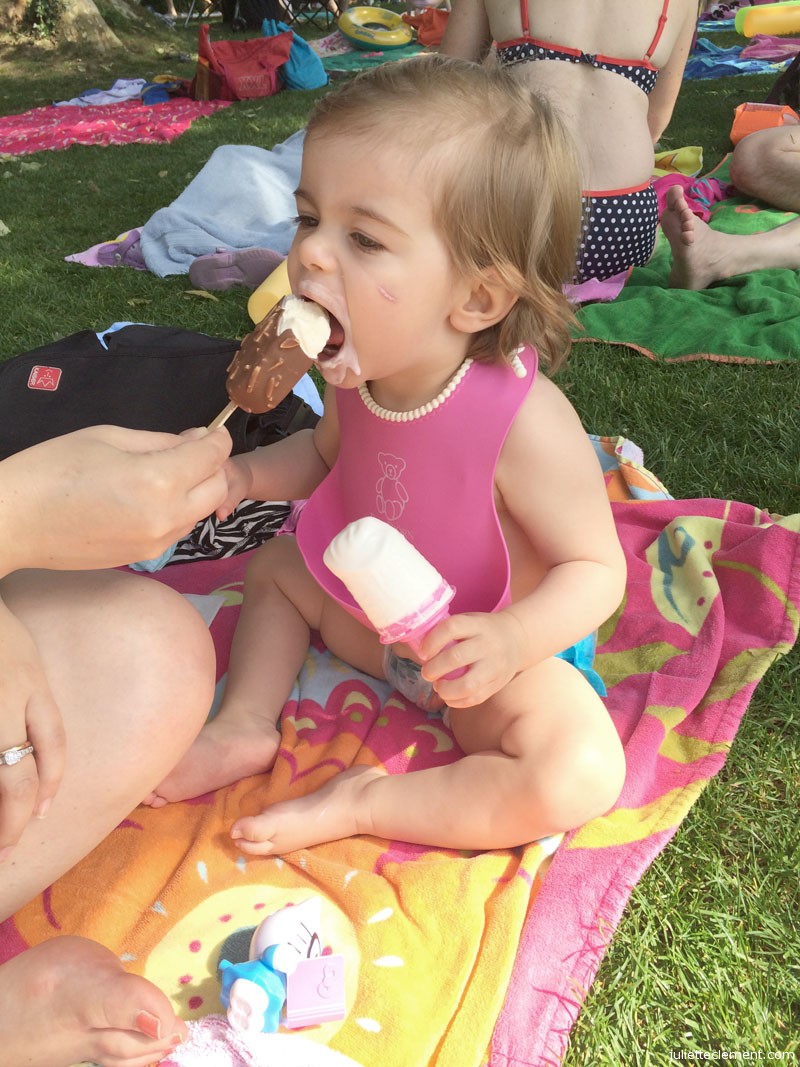 Two-fisting! Even better than her own popsicle is a bite from Mom’s. 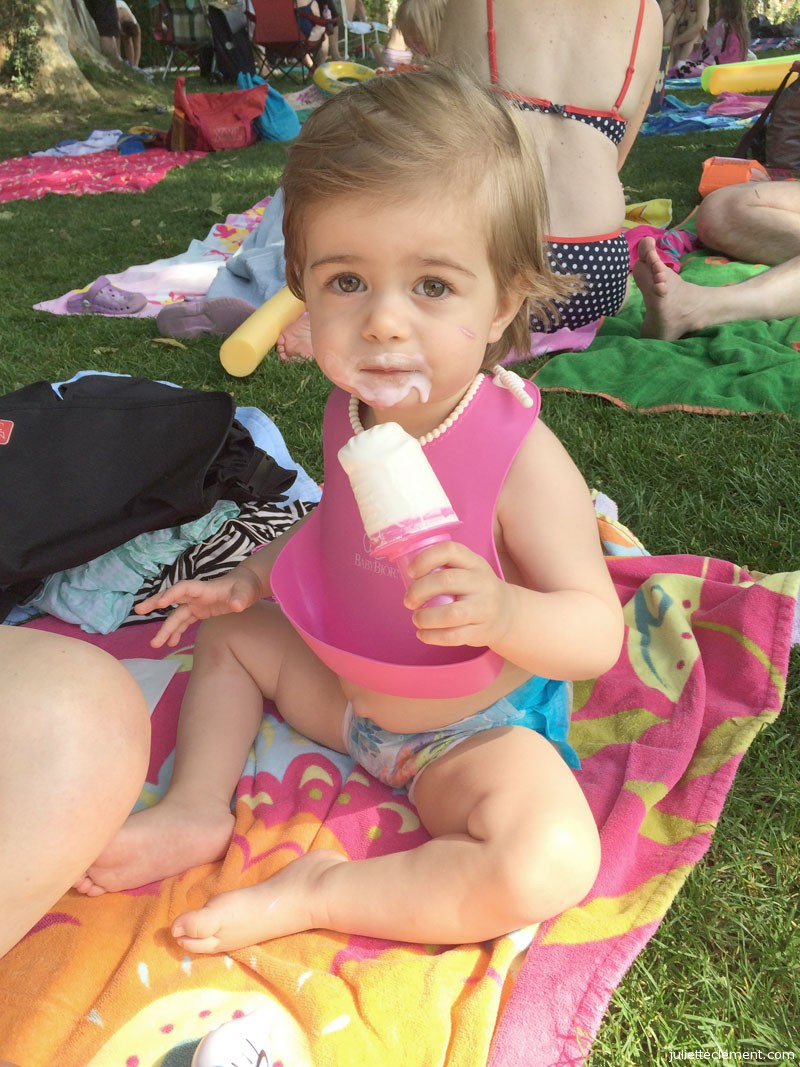 “What? Have I got something on my face?”

Boy, is it hot outside. Time for a splash on the porch! 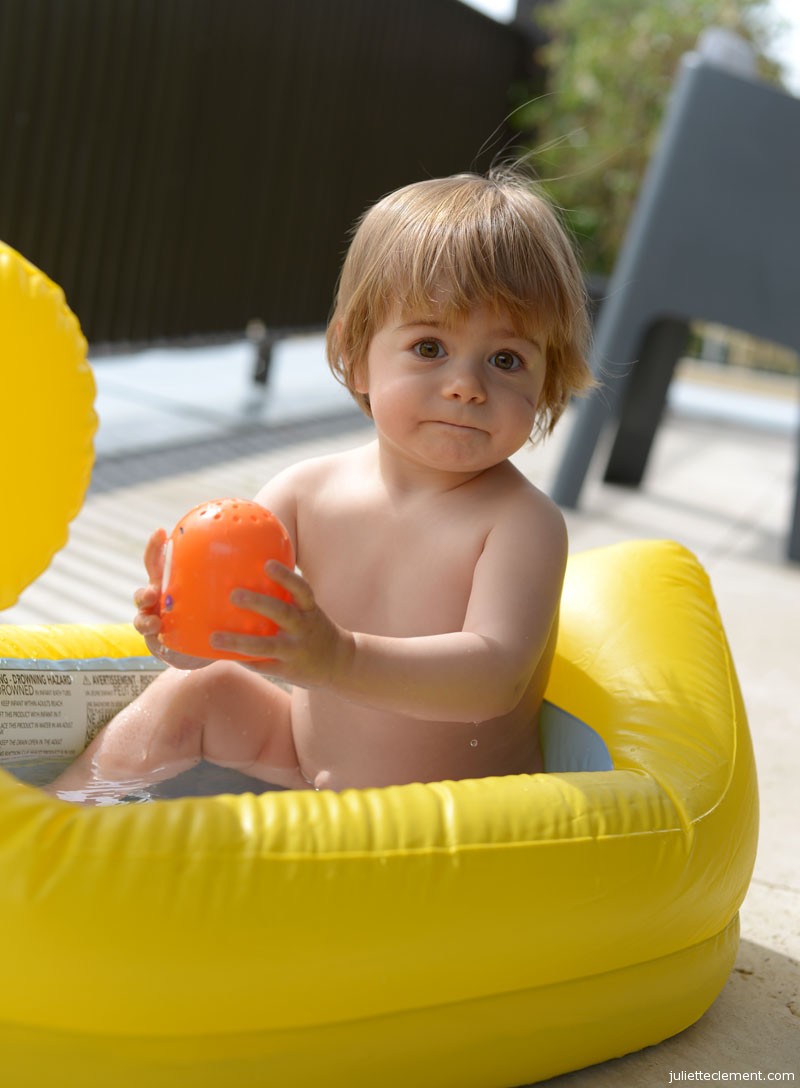 It takes a minute to get used to the water… 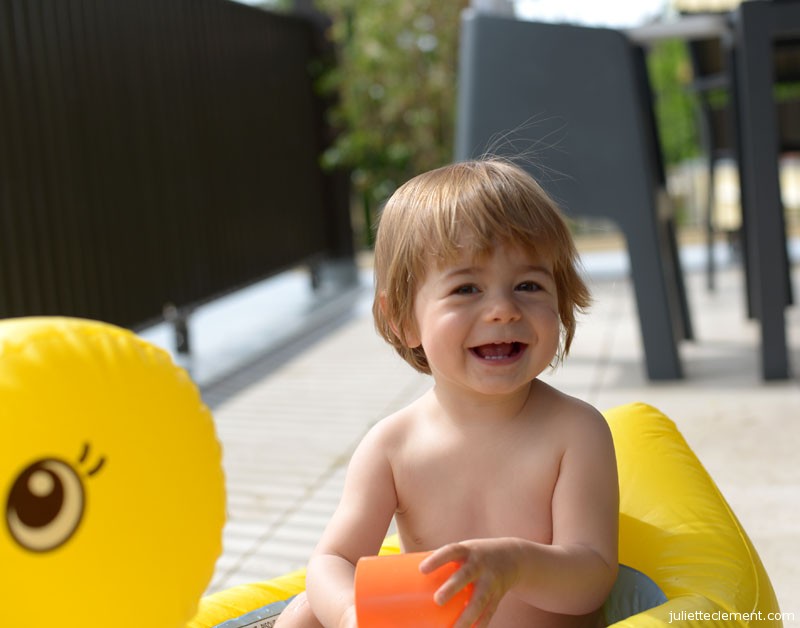 The cool water feels great on a hot summer day 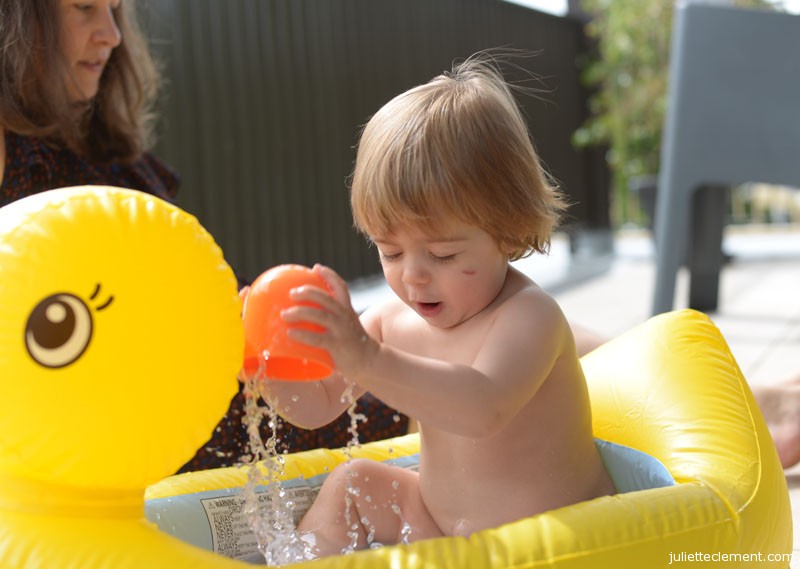 It’s a three-day weekend in Basel, and all of Juliette’s friends have taken the opportunity to jump onto a plane to visit Greece, Spain, Italy and France. Which was a terrible mistake on their part, because the weather forecast for the next three days here in Basel is superb — clear blue sunny skies and temperatures in the low 30s (Celsius, for Juliette’s American readers. Bathing-suit weather, not ski-suit weather). In fact, the weather here is better than in any of the places our friends disappeared to. (Dad checked, so that he could be justifiably smug when his friends returned from their travels.)

We woke up to an incredible morning, and the rest of the day has been just as nice. Dad decided to bring home a summery surprise while Juliette took her nap — ice-cold sorbet for gouter! 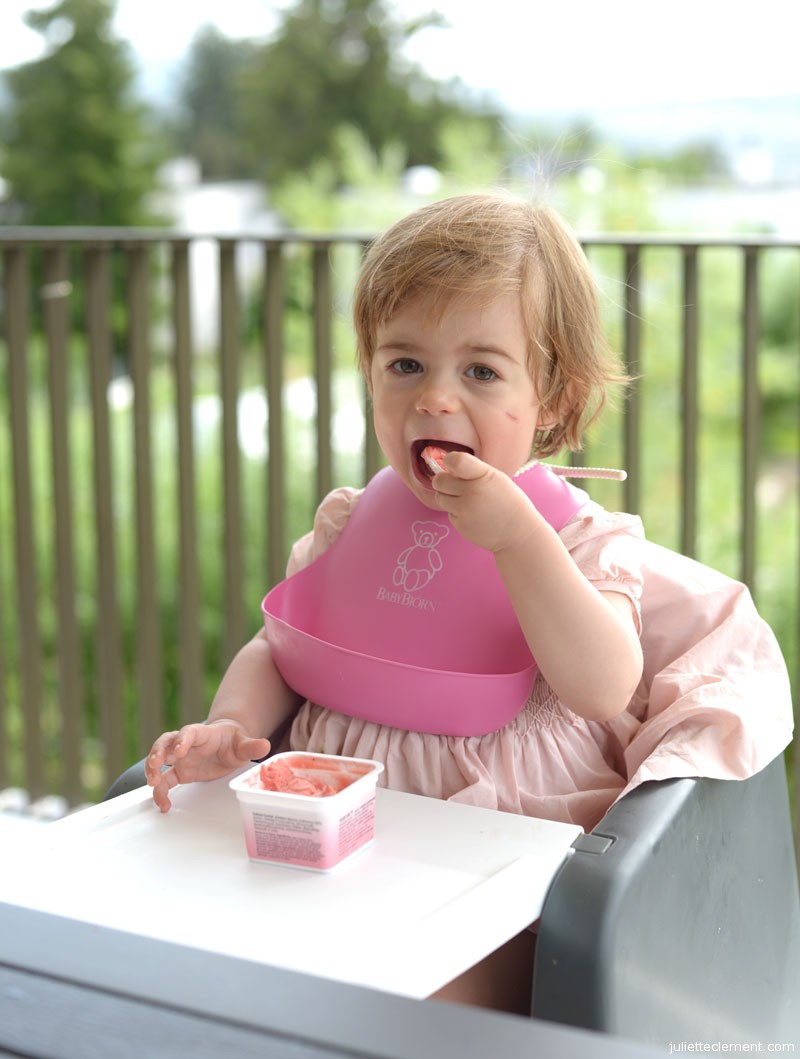 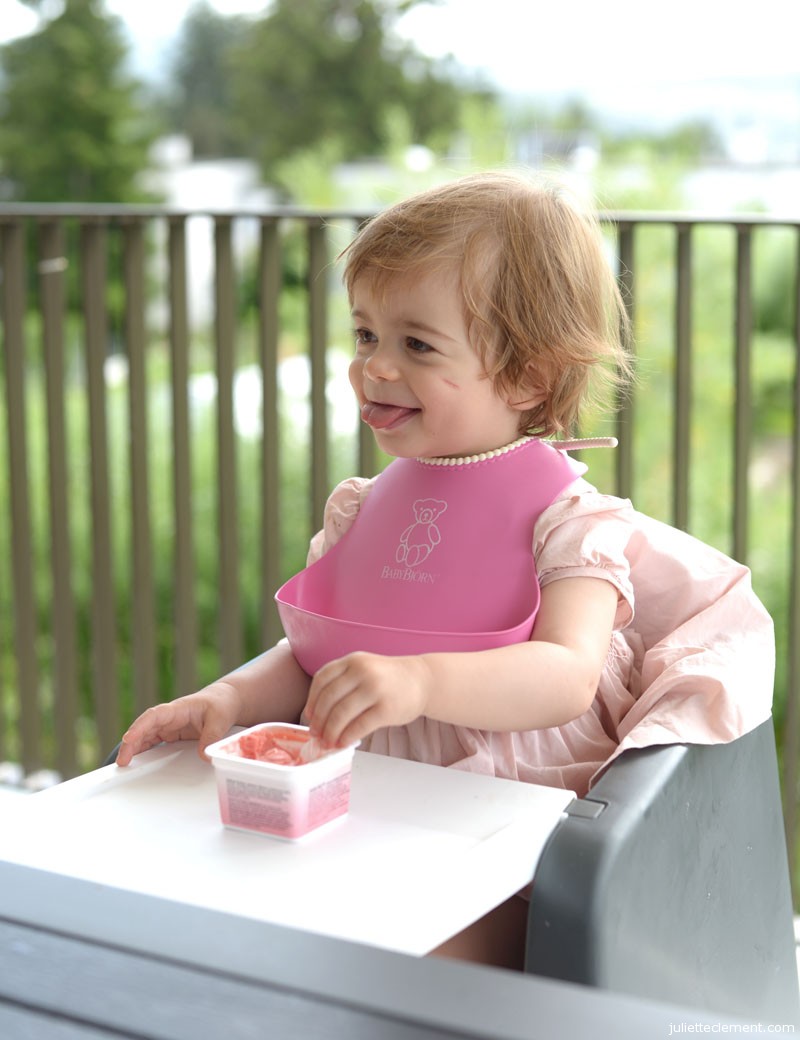 Good stuff! Smiles all around. 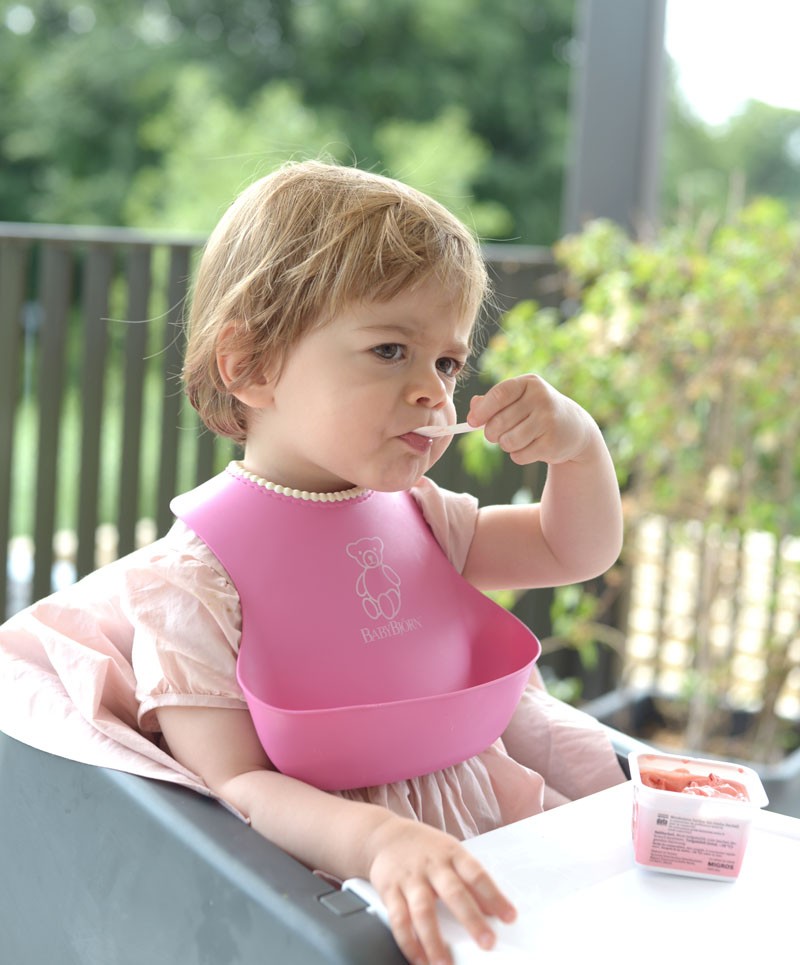 Juliette’s fourth-most-favoritest thing in the whole wide world (after 1. cheese, 2. kitty-cat, and 3. any food that comes packaged in a tube) is the children’s television show Sarah and Duck. So it was very, very, very exciting to find that a new friend was waiting in the mailbox today, all the way from the UK. It was DUCK! (quack).

Just like Sarah and Duck, who are best friends and who discover the world together, Juliette and Duck are inseparable. It took quite a bit of negotiation to suggest that Duck watch the bath instead of participating in it, and that Duck’s place at the dinner table was out of the reach of sticky fingers and flying food. 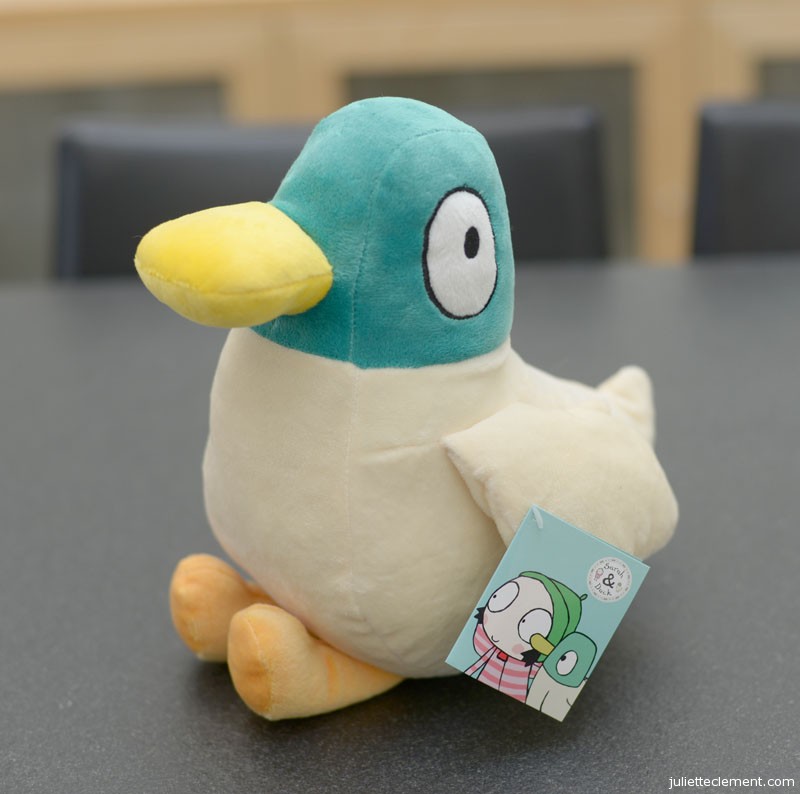 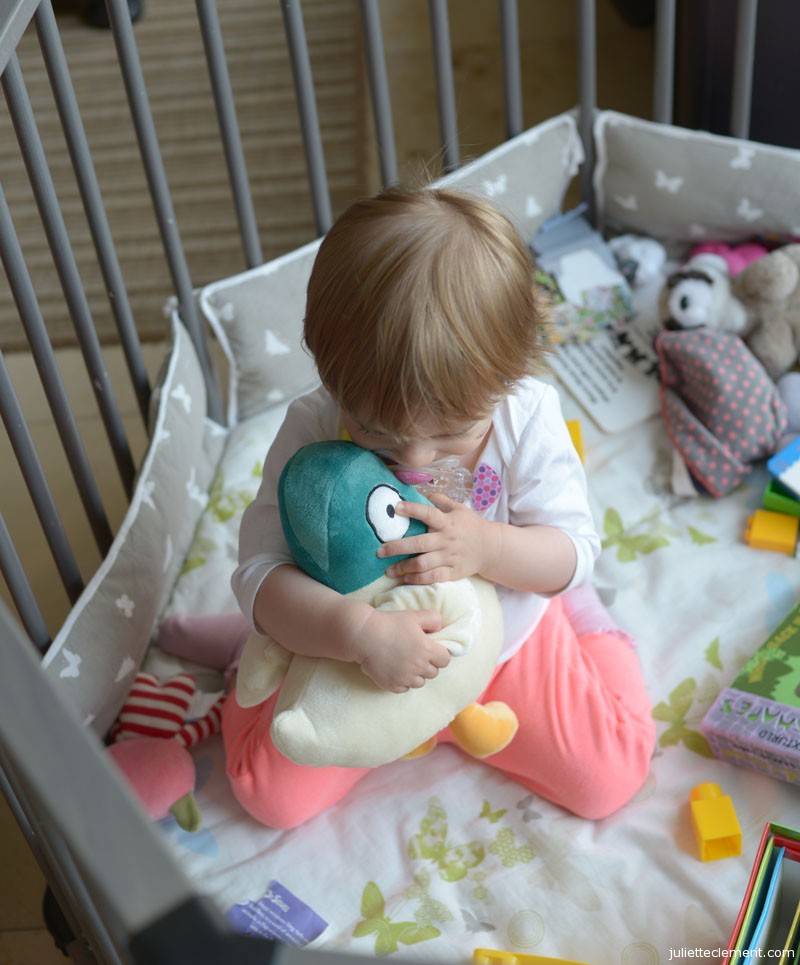