Juliette can be something of an unreliable witness when quizzed about what she does at school each day. A typical exchange usually goes something like this:

“What did you do at school today, Juliette?”

“Achilles made peepee and the teacher shouted.”

“Oh. That must have been something to see. Did you do some drawings?”

“Did you sing some songs?”

“Did you learn to fly an airplane?”

Still, when I looked over at the schoolhouse today, I wondered if perhaps I was a little too quick to dismiss her report of riding unicorns and playing with pots of gold. 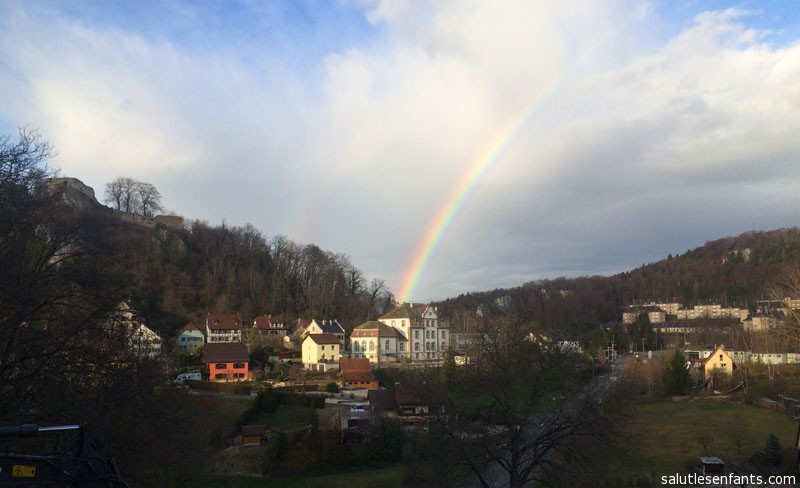 Luckily, the Kinderspital in Basel (the Children’s Hospital) has a wonderful emergency room and a great team of doctors who always take care of us. We’ve gotten to know the system pretty well.

Today was Juliette’s turn — she was playing in a crawling tube on top of a box (don’t ask!) and managed to somehow roll off. When she was still complaining of shoulder pain a day later, we decided it was time to spend an afternoon at the Kinderspital and have some x-rays taken. Armed with iPads, books, and coloring materials, we set off for a long day in Basel.

Sure enough, Juliette had broken her collarbone, so it’s two weeks in a sling for her. She seems not to mind too much — she’s loving all the attention! 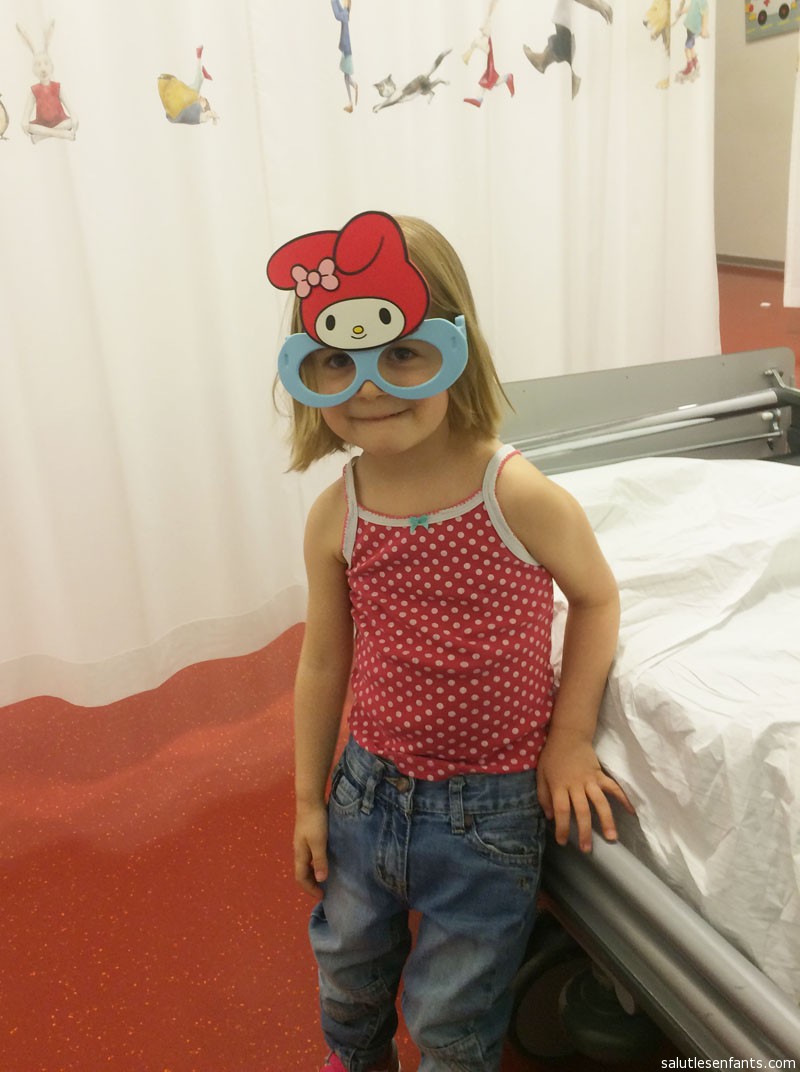 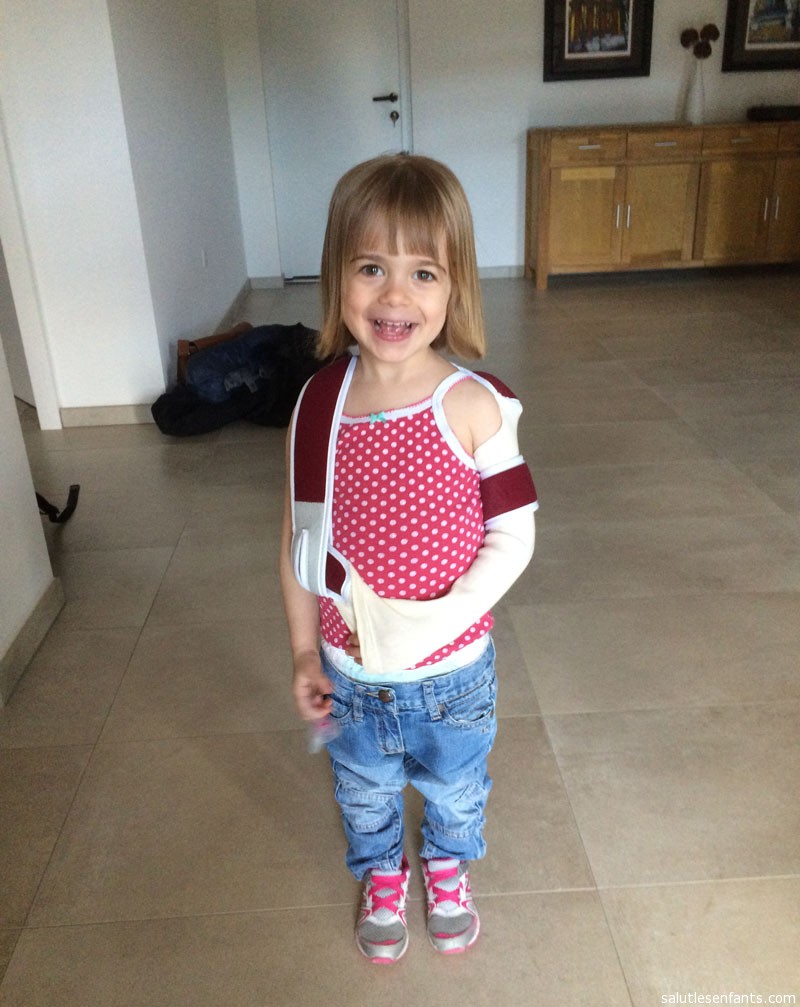 The big smile tells me that Juliette likes being the center of attention.

And this, kids, is why we don’t clown around in the house.

Yes, Alex enjoyed his chocolate very much. Why do you ask? 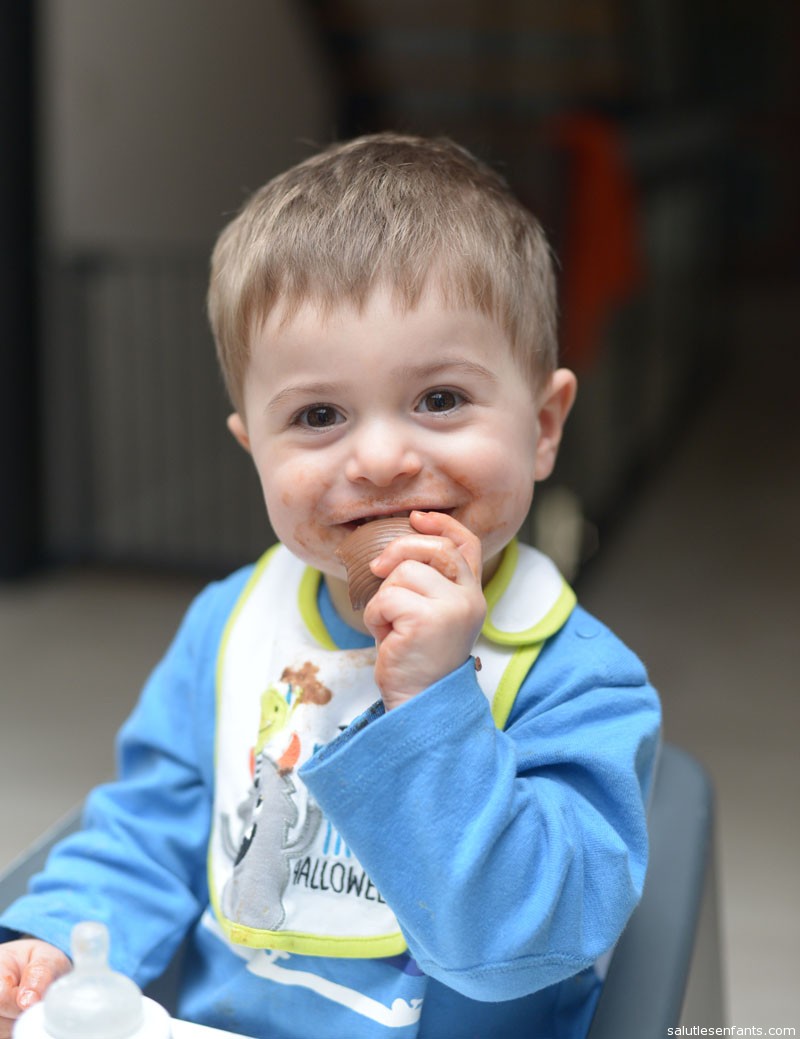 Tucking into an egg

“Whew,” thought Alex, “they’ll never know I got into my Easter candy…”

The day before Easter, and it’s time for the big Easter egg hunt at the local farm. We were greeted with crowds of children, lots of animals, and beautiful sunshine. 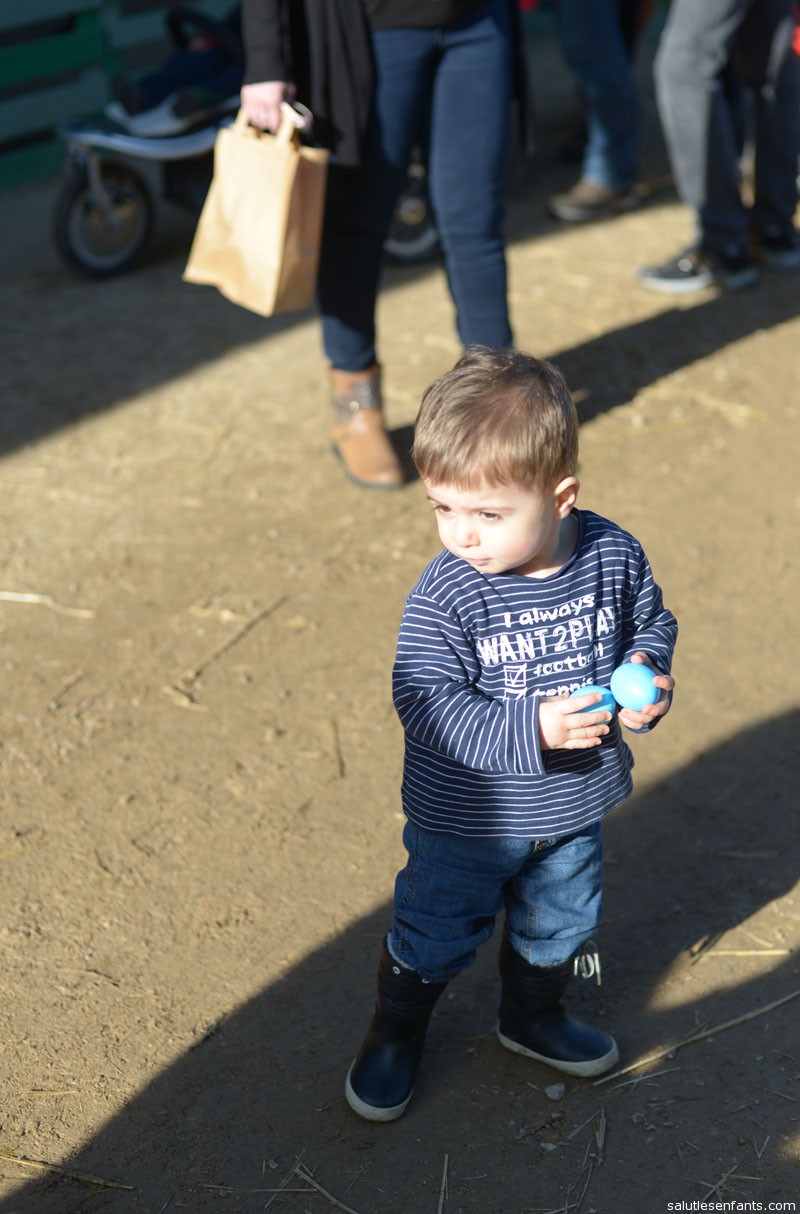 Two down, four more to find 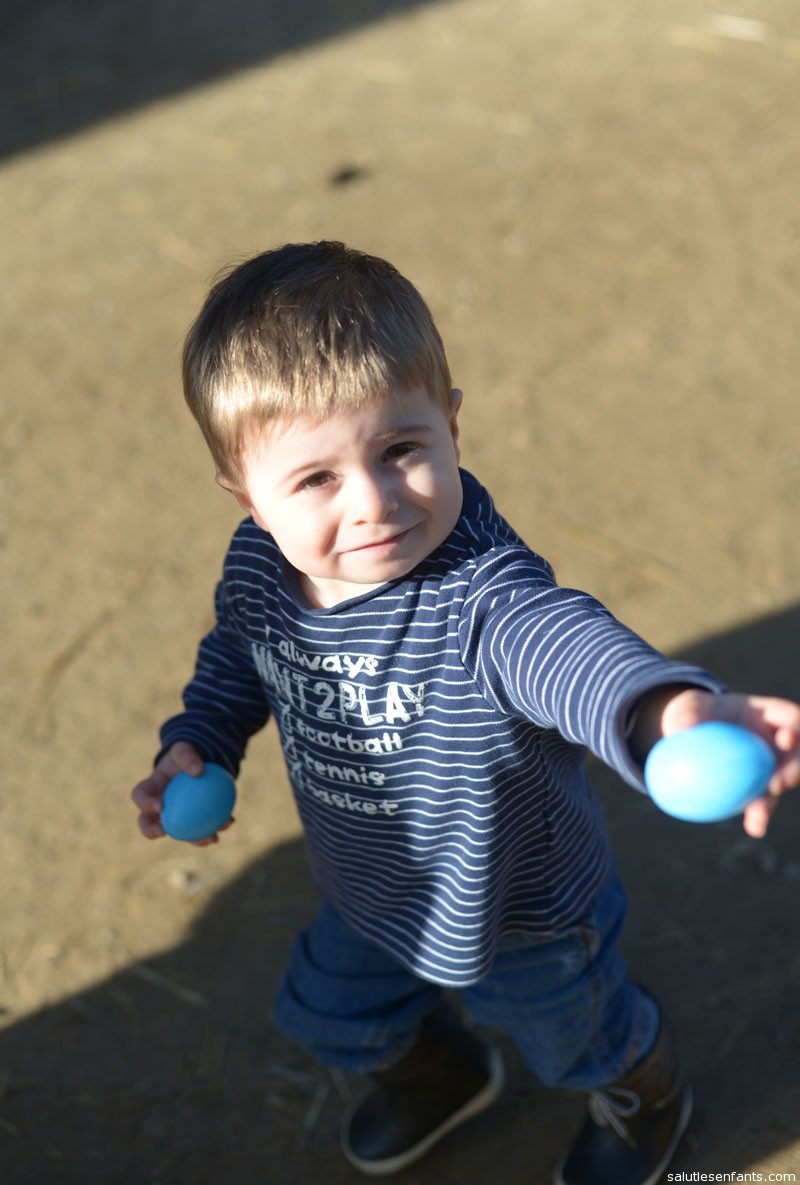 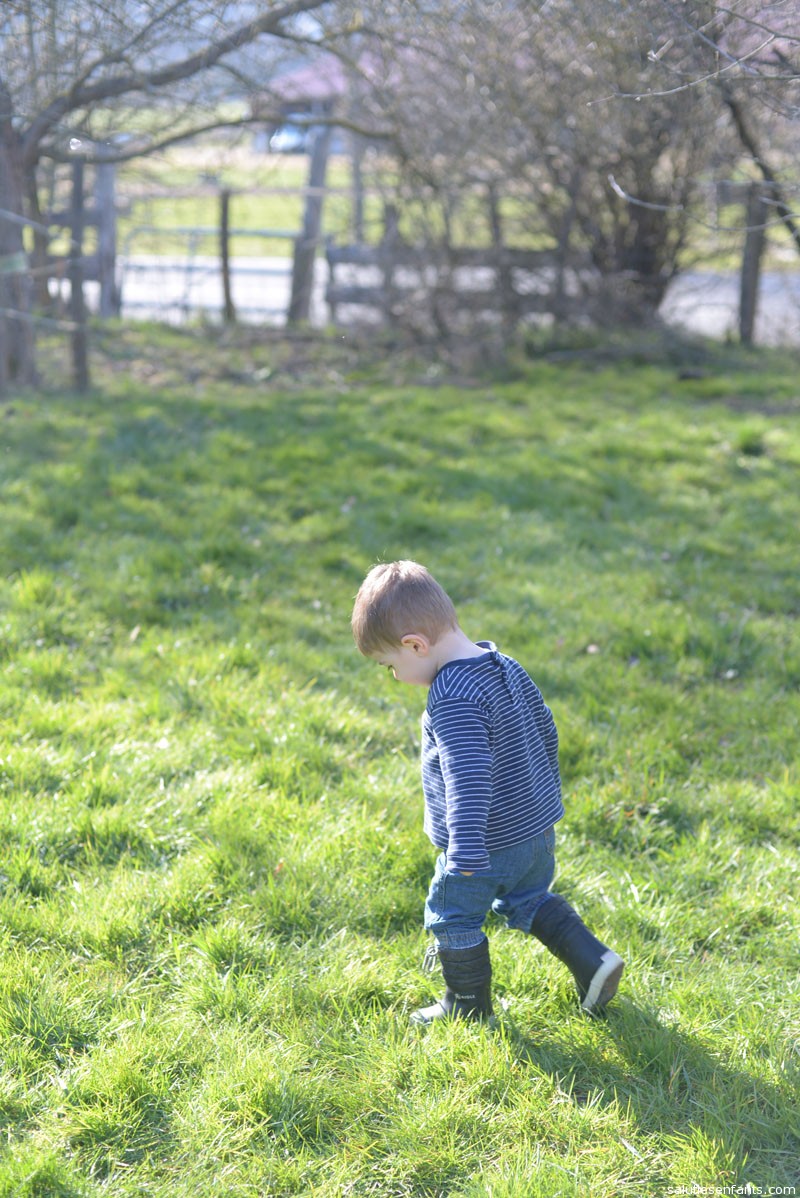 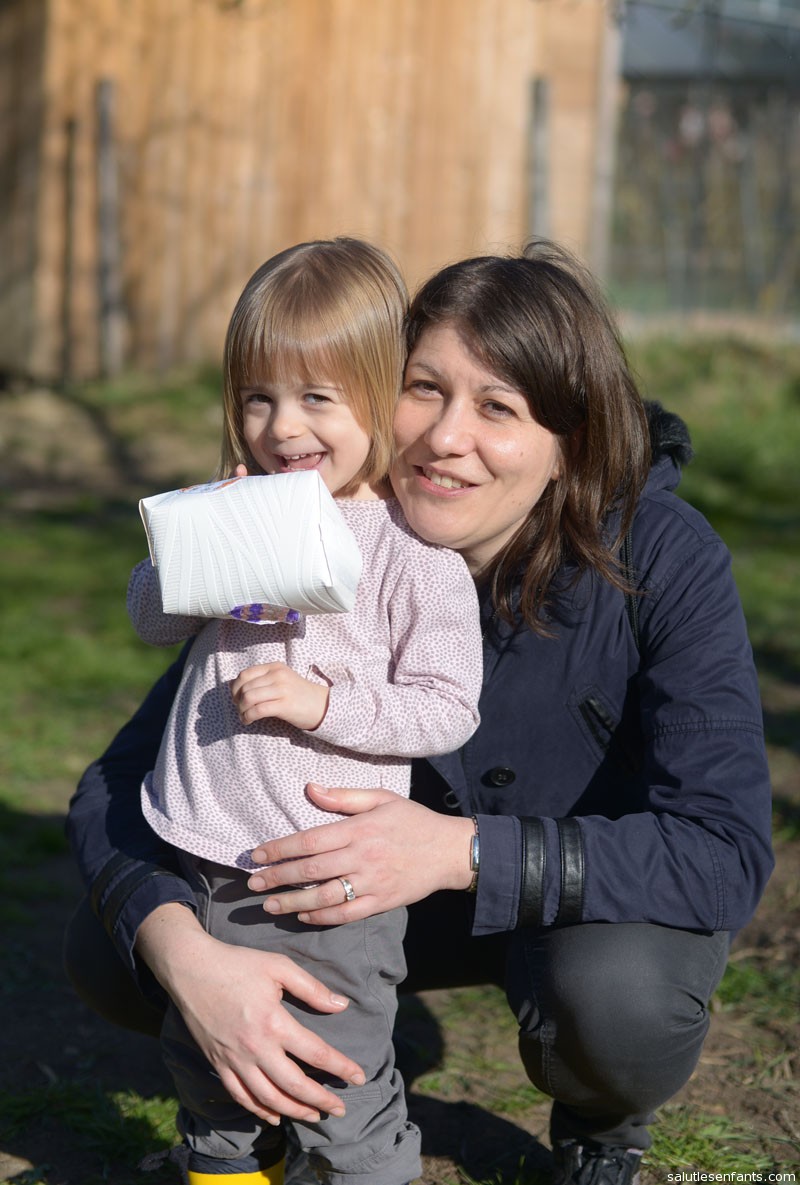 Juliette decorated her basket herself 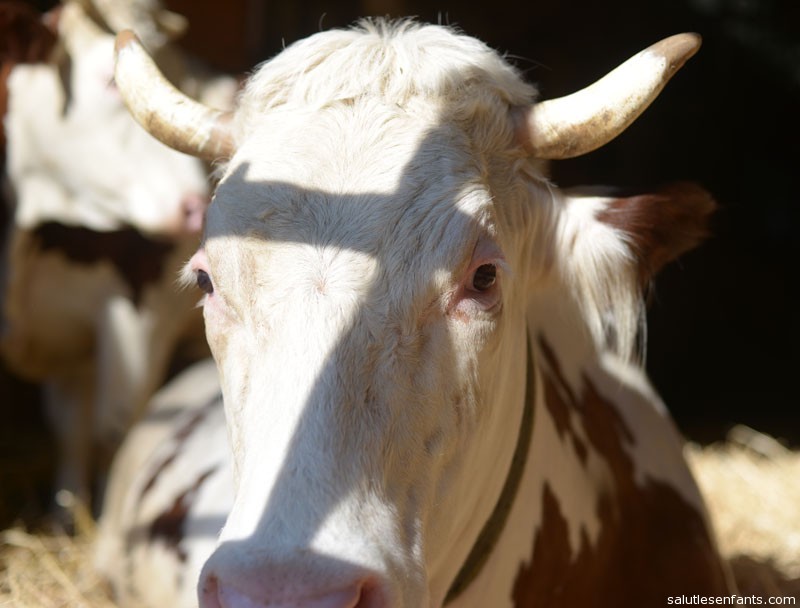 The Easter holiday is a pretty big deal in Alsace. Our official holiday started on Thursday, when Dad’s office was closed for the full day and Mom’s was closed for a half-day. Good Friday and Easter Monday are also holidays, with just about everything shut.

Holiday or not, the kids were up at 6:30 in the morning. And it’s raining, so we’re going to be housebound for today. Time to break out the activities to keep the kids quiet. First task, coloring and decorating the Easter eggs.

Tomorrow, there’s an Easter egg hunt at a local farm, then on Sunday it’s time for another Easter egg hunt with friends. Presumably, Monday features some sort of “cooking with eggs” activity. We’re crossing our fingers and hoping for good weather. 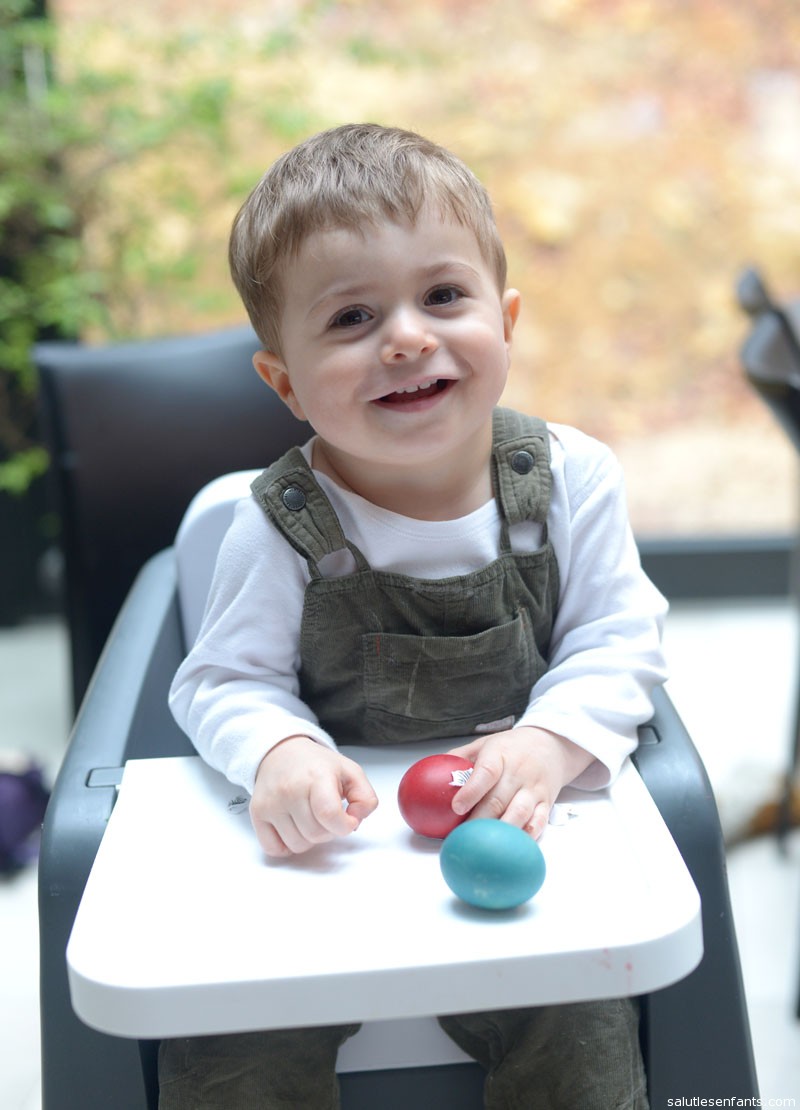 Alex shows off his Easter eggs. For about 30 seconds. After which the ‘boy’ instinct kicked in and he smashed them. 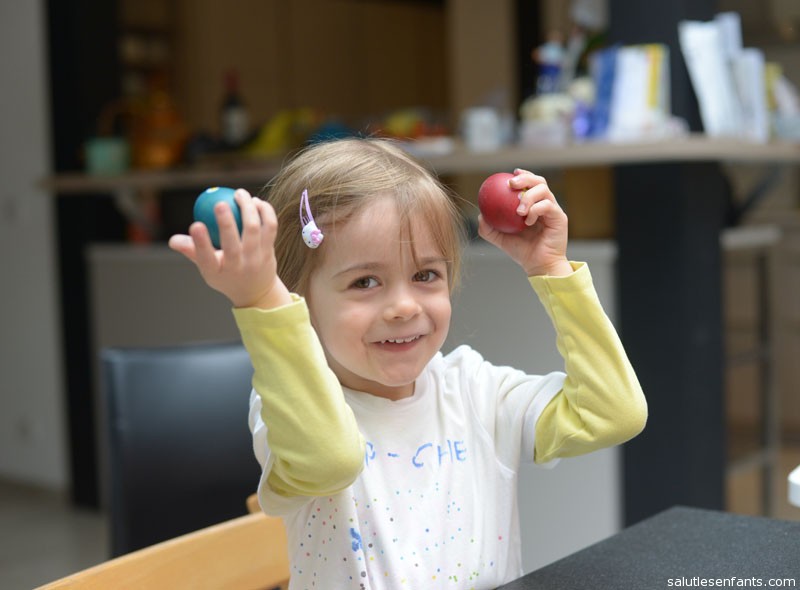 Juliette’s decorated her eggs with stickers 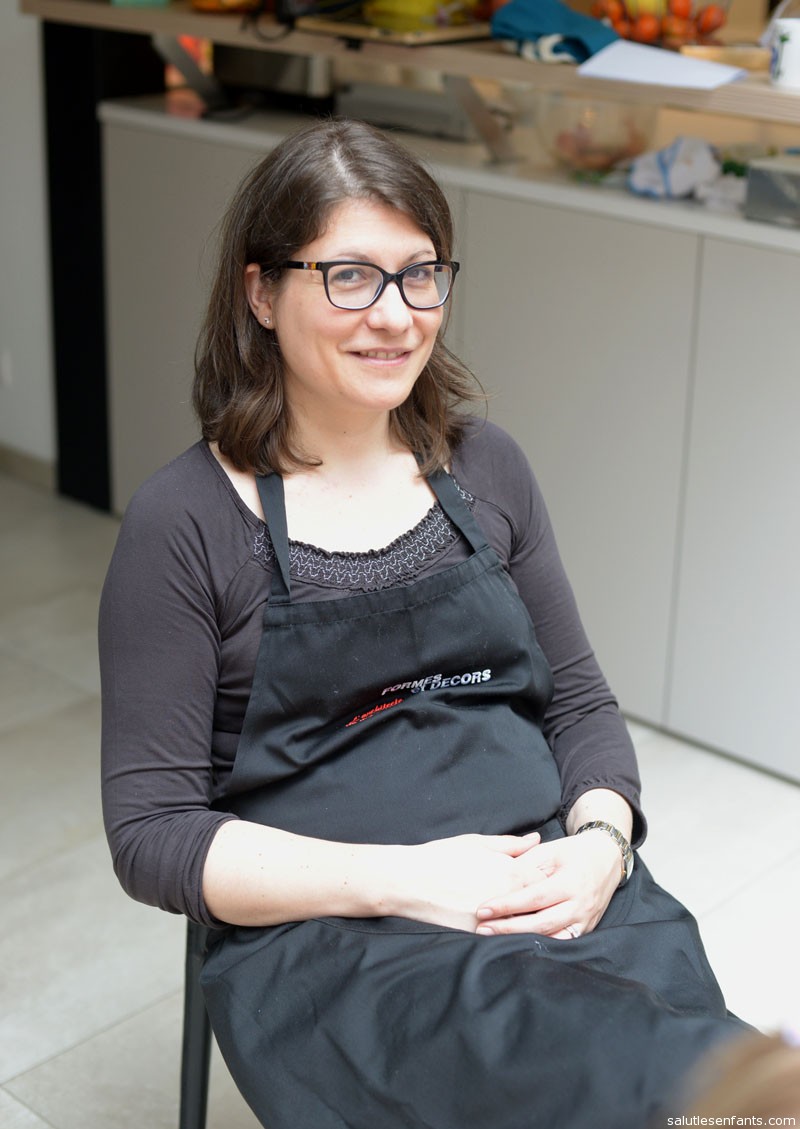 10am on the first day of a four-day weekend and we’re already exhausted. Is it time to go back to work yet?

There’s something about the French and their fromage… 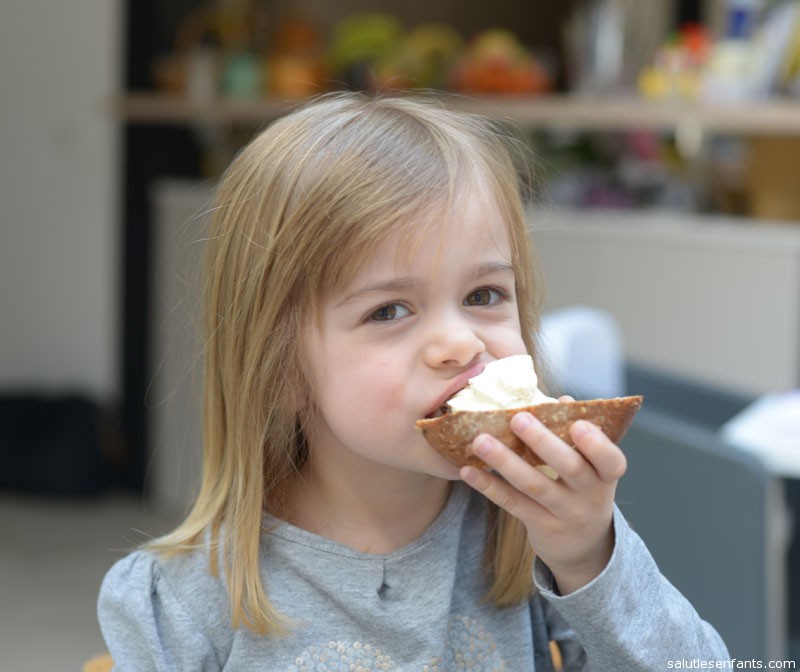 After a long, cold winter that seemed like it would never end, spring is finally here. Alex decided to go outside to enjoy the warmer weather… 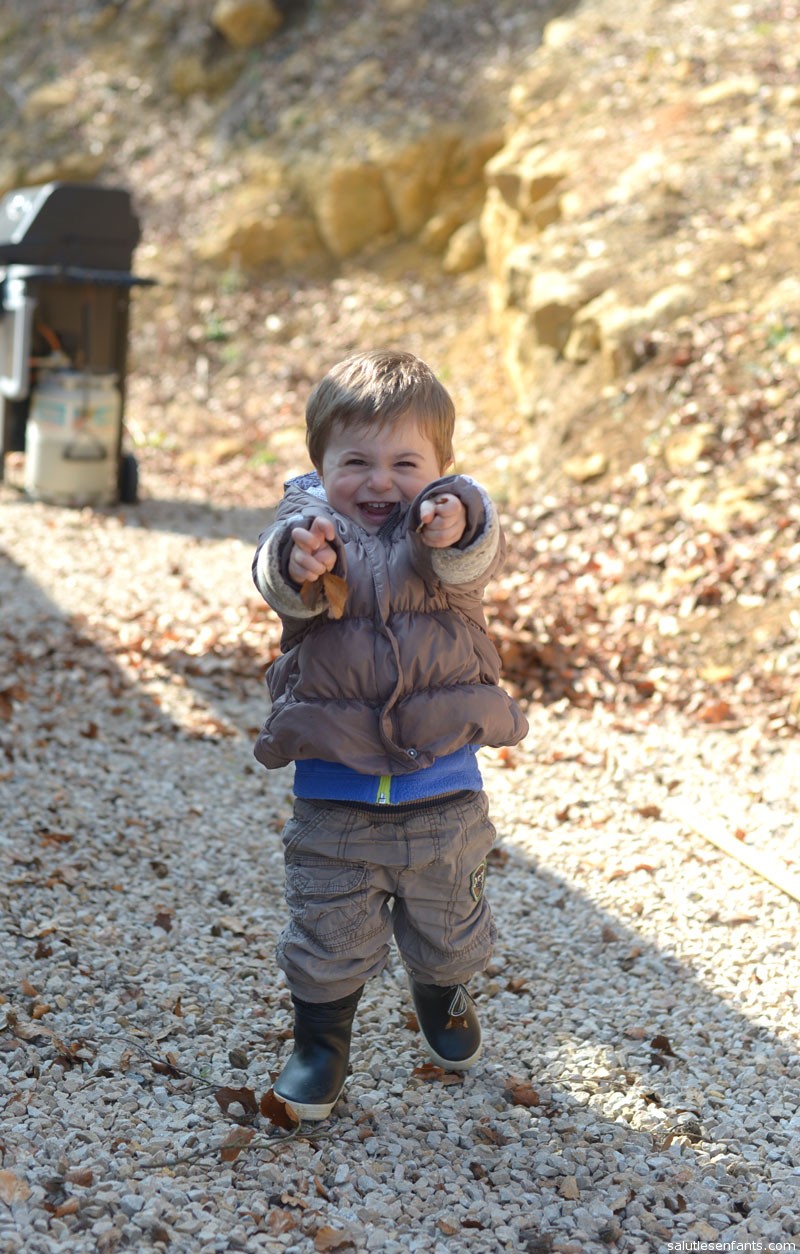 The sooner Alex learns to speak and can say “I’m finished,” using words instead of actions, the better. 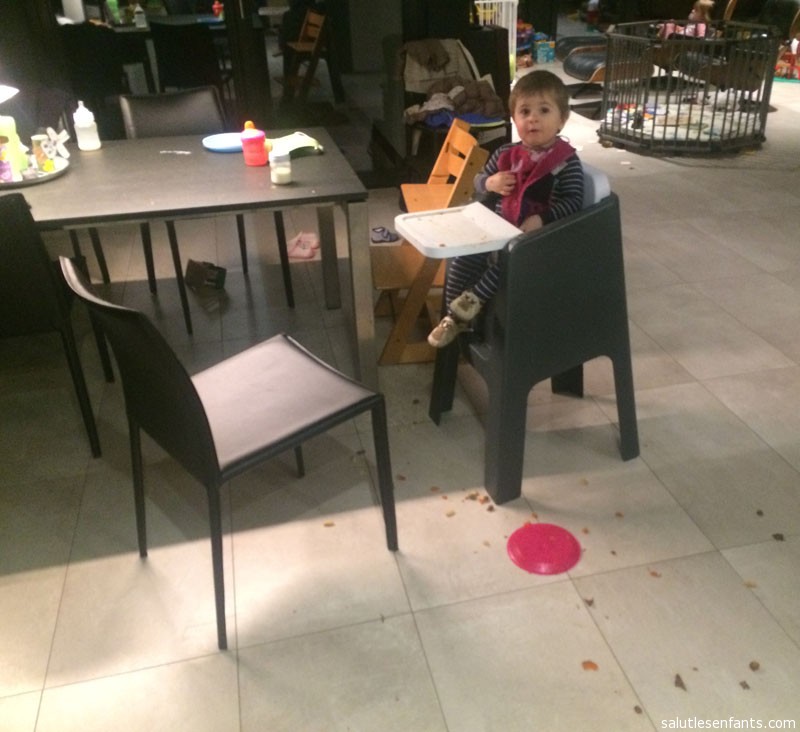 Alex likes to stay up to date with the latest headlines… 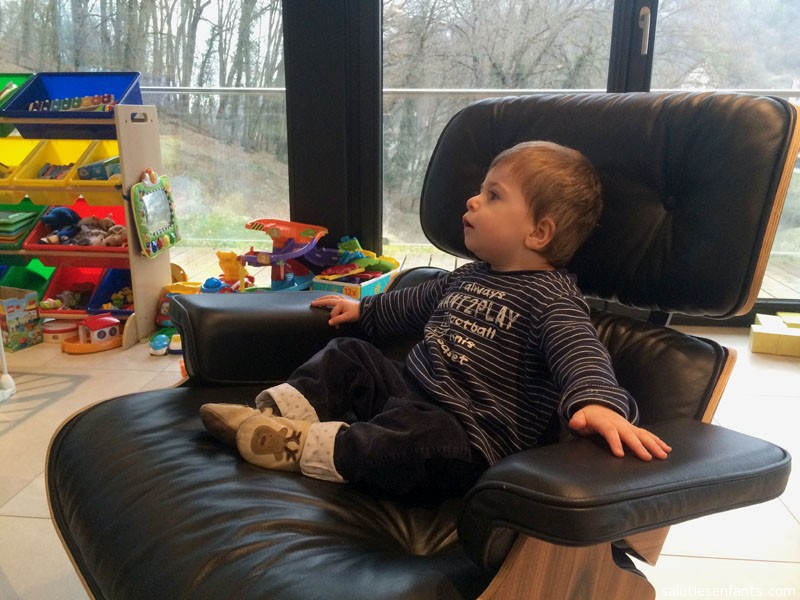 A cold, grey morning was the perfect excuse to stay inside and do some arts-and-crafts. 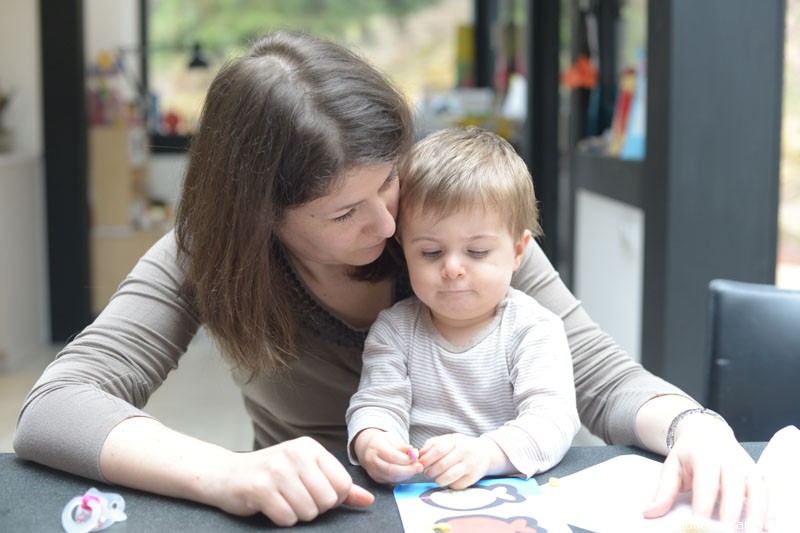 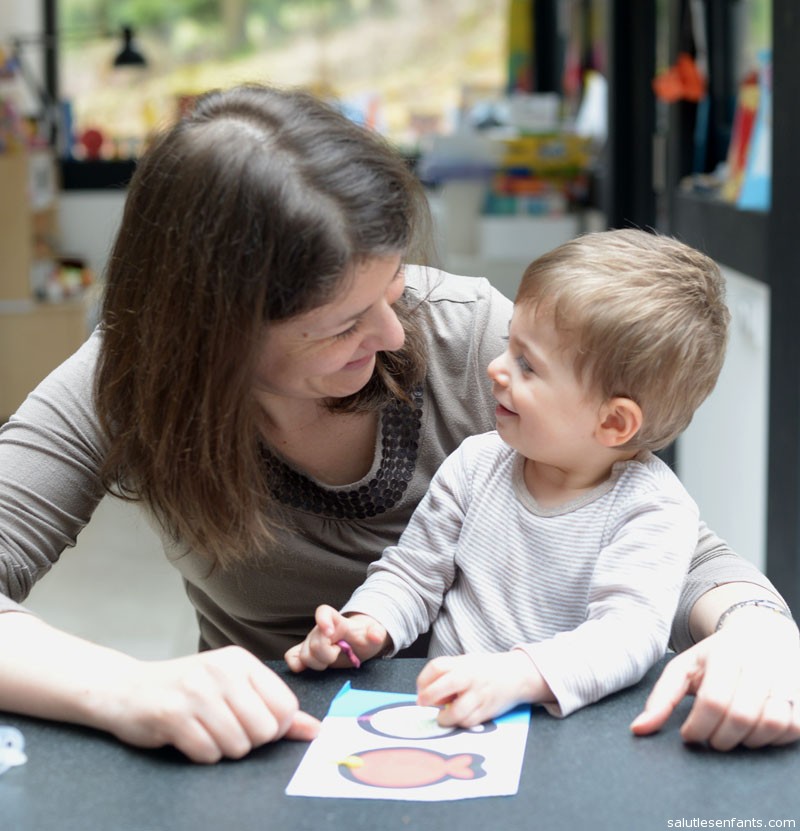 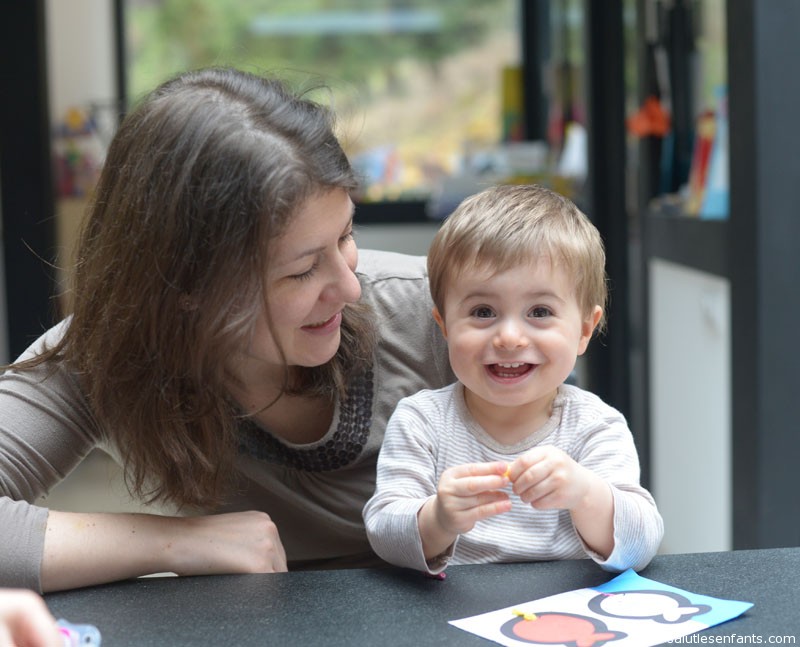 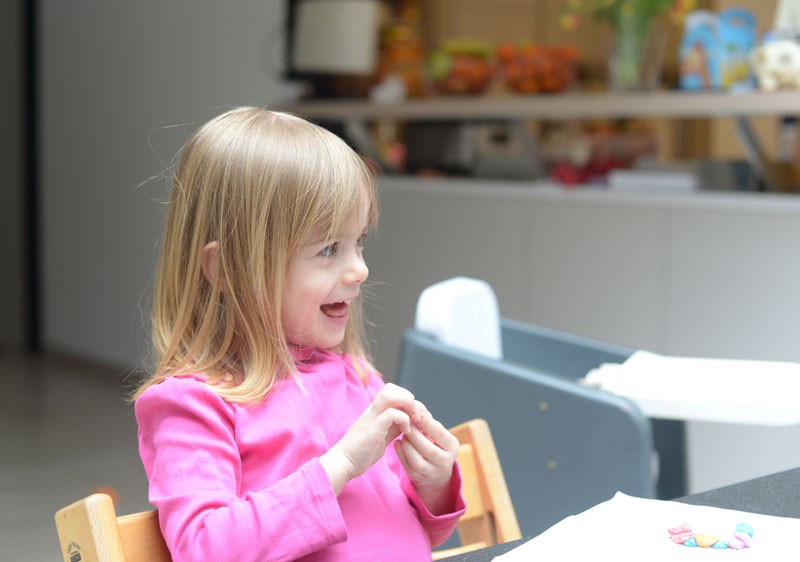 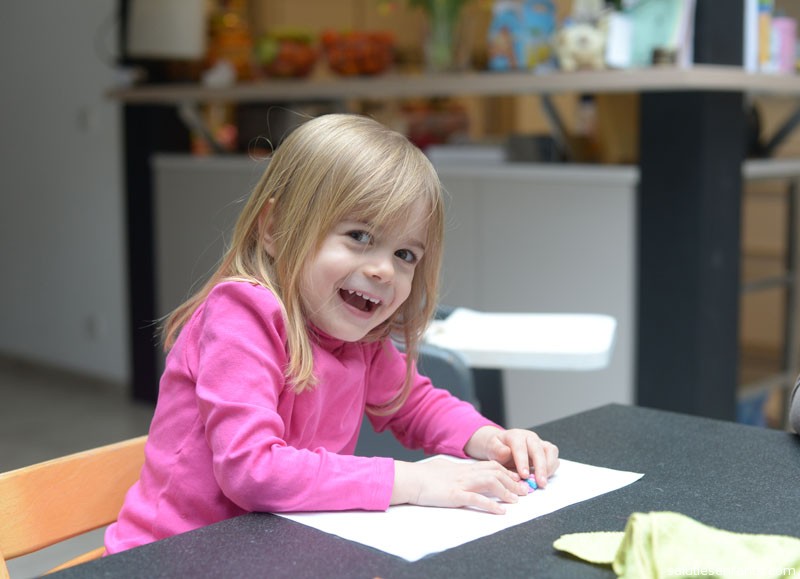 …and a quick smile for the camera